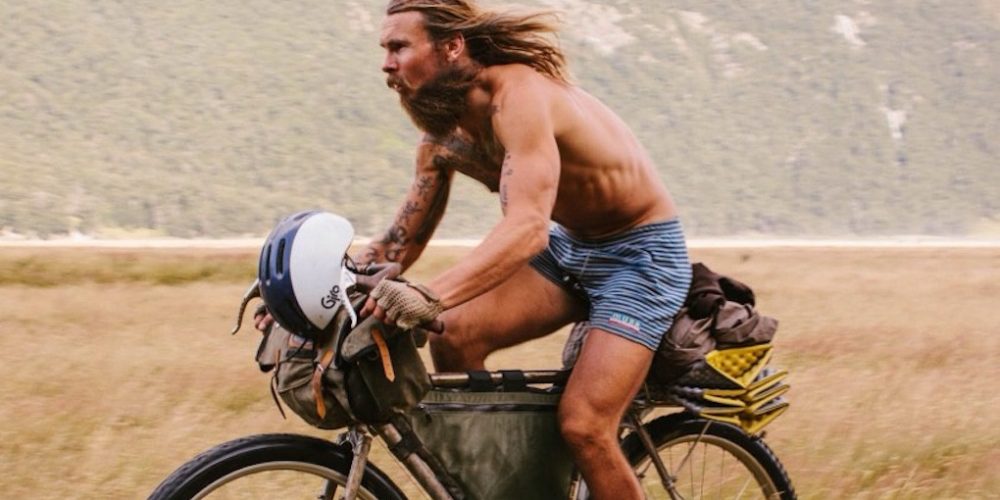 Most of us lead a life that revolves around work. The average US worker, for example, clocks 47 hours a week, and when you add the time we spend commuting, another five to 10 hours, it pushes our total work-related hours over 55. Then there’s work-related stress, which damages our health.

All of that can paint a vulgar picture of life in our modern world, one that two or three weeks’ vacation can hardly remedy.

Then there are those who refuse to buy into all that and choose to live on the fringe, like Ultra Romance, a 35-year-old from the Connecticut River valley who works as little as possible — usually for six months a year — and then goes adventuring around the world with his bike and modest camping gear.

Since college, 15 years ago, Ultra Romance, aka Benedict, says he hasn’t lived more than six months in any one place. He has never owned a car, and he got a bank account just so he could buy and sell bicycle parts on eBay. (He keeps the cash he earns in little bags that he buries in the ground.) He says he lives on $10 a day.

“We have this preconceived notion of what success is in the modern world,” he recently told Business Insider. “I’m not ashamed that I don’t like to work. It’s just very unnatural.”

This week we caught up with Ultra Romance to learn more about how this free spirit has bucked society’s expectations and made his own path. He recently appeared on the cover of Bicycling magazine and has become popular on Instagram. Read on to see what he told us about how we work too much and, well, probably live and play too little: 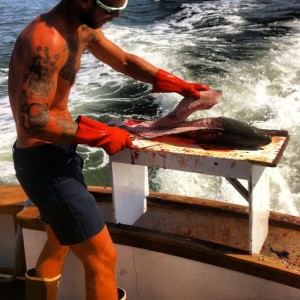 “I work about six month of the year, as a commercial fisherman or charter fisherman or a guide. I also sell bicycle parts online. It’s been very much like, get your work done for part of the year and do whatever you want the rest of the year. For me, work is a segue to traveling.”

On going a different route 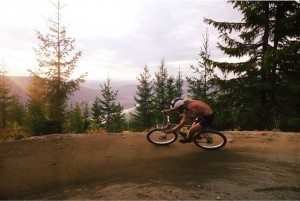 “I went to college and got the degree and was trying to be a PE teacher or a personal trainer and do the hustle right out of college. Then it was like, I gotta get a house, I’m 24, I got all these student loans … Before you know it, things work out and you meet the right girl and you settle down and buy the house and have the mortgage payment and the cars. But ultimately that was not going to be me.” 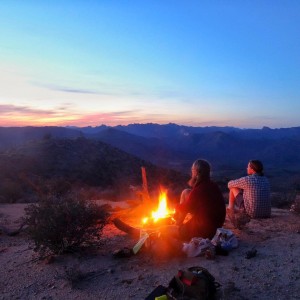 “We have this preconceived notion of what success is in the modern world. For me, it’s part philosophy, part circumstance … I study history and anthropology, and I’m not ashamed that I don’t like to work. It’s just very unnatural. I like to simplify things. I’m a handshake kind of guy, so paperwork and bills don’t work for me. They were a big stressor in my life, and I sort of eliminated all of them.”

On modern work and meaning 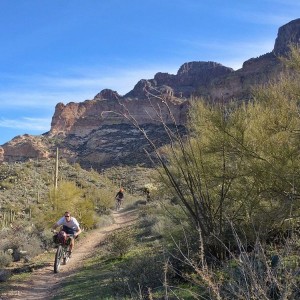 “The more you learn about human history, it reveals that in a hunter-gatherer society, say in New England 400 years ago, it took nine hours a week to procure everything you needed to live for that week, and the rest was all leisure time. This is what’s natural to us. We’ve only been living the way we are now since the Industrial Revolution, and it’s not for me.” 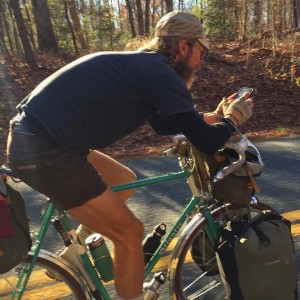 “I like to romanticize the ideals of being out on your own and that ultimate freedom of not having any ties. I understand that you need to have some ties — we can’t go directly back to that. At this point we’ve gone too far. And I’m not one to get held up in a mountain like a hermit. I like my internet and I love Instagram and all that stuff — I love Whole Foods. There are plenty of modern conveniences that I love.”

On life on two wheels 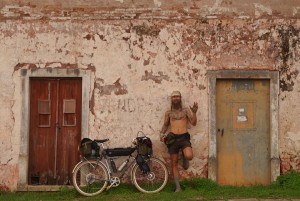 “Bicycles have always been my thing. I’ve devoted my life to the bicycle, unintentionally, not expecting anything out of it. It’s been a tool for me to do what I want, on the cheap, going hand in hand with the lifestyle I was trying to lead. 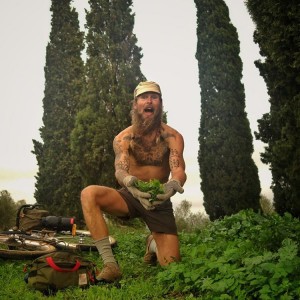 “My degree is in nutrition, and I’ve always taken care of my body and made sure I was eating well. But my fascination is in peasant foods, and generally those are pretty cheap. Yogurt is a staple of my diet, and the rest is foraging. I don’t buy produce or fruit, and I can usually find whatever greens or berries or anything else I’m looking for. If I’m near the coast I can get seaweed and crabs. I don’t necessarily eat for taste. It’s a lot for nutrition.

“But I do eat a lot of chocolate! That’s my biggest food expense. Maybe some day philanthropists will shower me with cacao — what more could I ask for!” 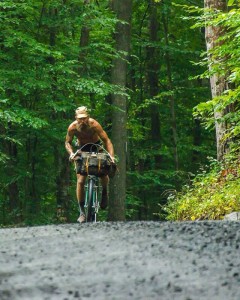 “My parents never told me I can’t do anything. I didn’t grow up like that. So no matter what I do they’re proud of me. To have that kind of support and that foundation, it’s really important and it makes you a confident person. It sounds cheesy, but it makes you believe you can do anything. I’m lucky in that regard. I know a lot of people have a different situation going with their parents, especially if they wanna be a bum!” 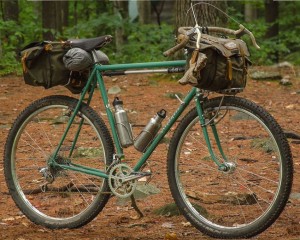 “I have a lot of bicycles and never owned a car. I’ve never really spent money on anything but camp gear and bicycles. I hold onto a lot of them, and I’m lucky to have parents with a basement. I have 15 to 20 bicycles. I call it my ‘Antique Road Show’ down there. They’re all rusty and worthless to most people, but to me it’s like — I dunno — my art. Building new bicycles and ramrodding them out and seeing what you can do with all these different parts and wheel sizes and gearing and handlebars.” 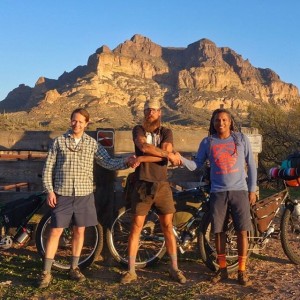 He has not lived anywhere for more than six months. He says it’s been very much “get your work done for part of the year and do whatever you want the rest of the year.” He sometimes travels alone, sometimes with friends. His bike-camping adventuring has taken him as far as New Zealand, where last year he and a buddy wandered around the country. 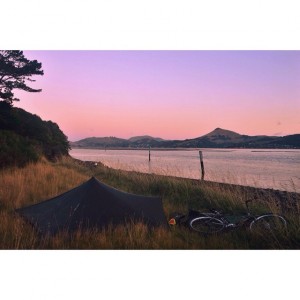 He always wanted to live in certain areas of the US where the riding was beautiful but was put off by the cost of living. Plus, he says, he just loves camping so much. Last year, during his adventuring season, he slept inside just 14 nights. Over the past 15 years, he’s gotten his “camping system so dialed in.” Each year he gets better at it and slims down what he carries.

“You learn more what you can and can’t do, and the limits of your body, and how long you can sleep in the dirt, which at this point is actually infinite,” he says. “I prefer to sleep outside, though it’s not for everybody.” 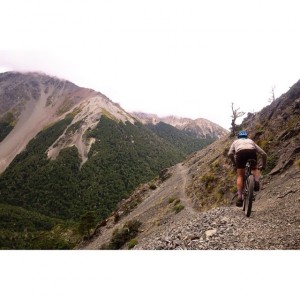 “I like to maximize relaxation when I’m bike-touring. I have no real goal. I just ride. It’s riding, setting up a hammock, taking a siesta, and chilling out.” 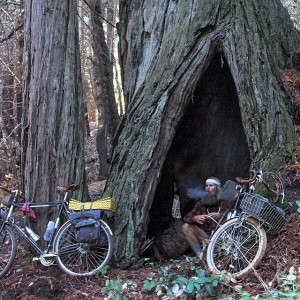 “I don’t count my money. Money really stresses me out. I just put it all in a bag and hide it somewhere. As long I have something in there, I know I’m doing something right. I think day by day. I don’t think too far into the future, but I’m happy, and I’m always open to change.” 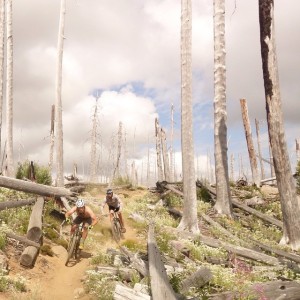 “I don’t like to work. I like to ride my bike and I like to camp. I do love doing certain kinds of work that feel meaningful to me, but for the most part I’m not going to spend the best years of my life doing something completely meaningless.”

On bikes as escape 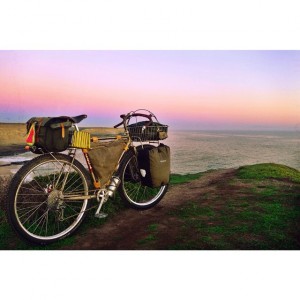 “I’ve always done everything on a bicycle. When I was a kid it was the first taste of freedom. Now, I get panic attacks if I don’t have my bicycle around me. It’s my escape. If I have a bicycle I can always get out, no matter what situation I’m in. Even if I have two flat tires I can move that thing away. I can fix it if it’s broken …

“Just get rid of your car and just use the bike for everything. Make the time for it. You don’t always have to work, work, work to afford all this fancy shit when you can just piece together a Craigslist find and put a bunch of rusty parts on it and clunk it down a hill.”