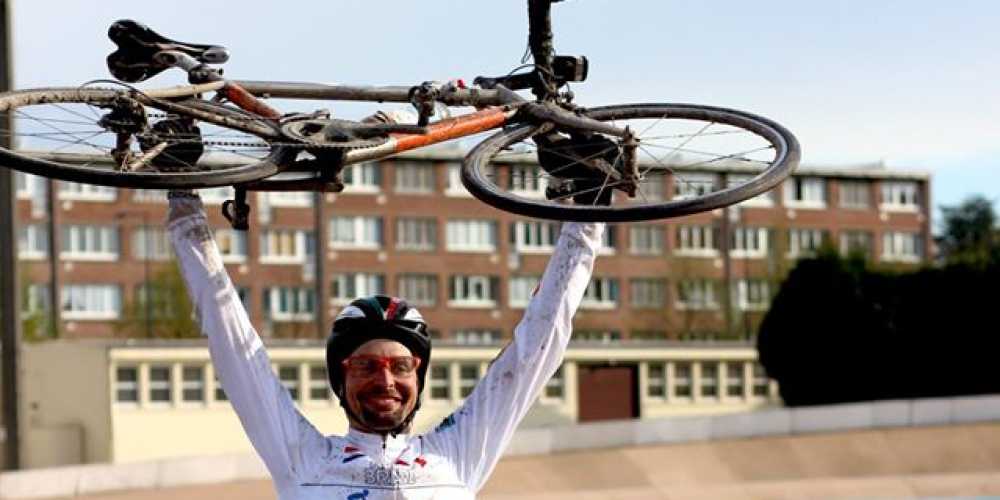 While Paolo Aste attempts the record of 6 Northern Classics in 5 days, the traditional start of the season along the same legendary paths is going to end. Here’s how it went, for one and the others.

The ride of Paolo Aste along the first of the 6 Classics, on Wednesday, April 13 will be unforgettable for him: of ten hours of pedaling, Paolo spent nine and a half of them pouring rain, running into the mire, on the slippery cobblestones. Despite all he managed to keep the average  of 25 kmh, finishing the path completely covered with mud, bike included. Without losing the smile.

This was his Paris-Roubaix, the first of six Northern Classics that he faced alone, in the same period of the official competitions. Aste went through all the 27 cobbled sections composing the total of 257 km of the legendary race taking place in the northeast of France, on the border with Belgium.

Three days before it was gone a bit better, meteorologically speaking, to cyclists who had competed in the official contest, won by Australian surprise Mathew Hayman, who turns 38 years these days. A very fast race in the first two hours, but still characterized by many difficulties and tough weather and with slippery cobblestones that led to the fall of several cyclists. 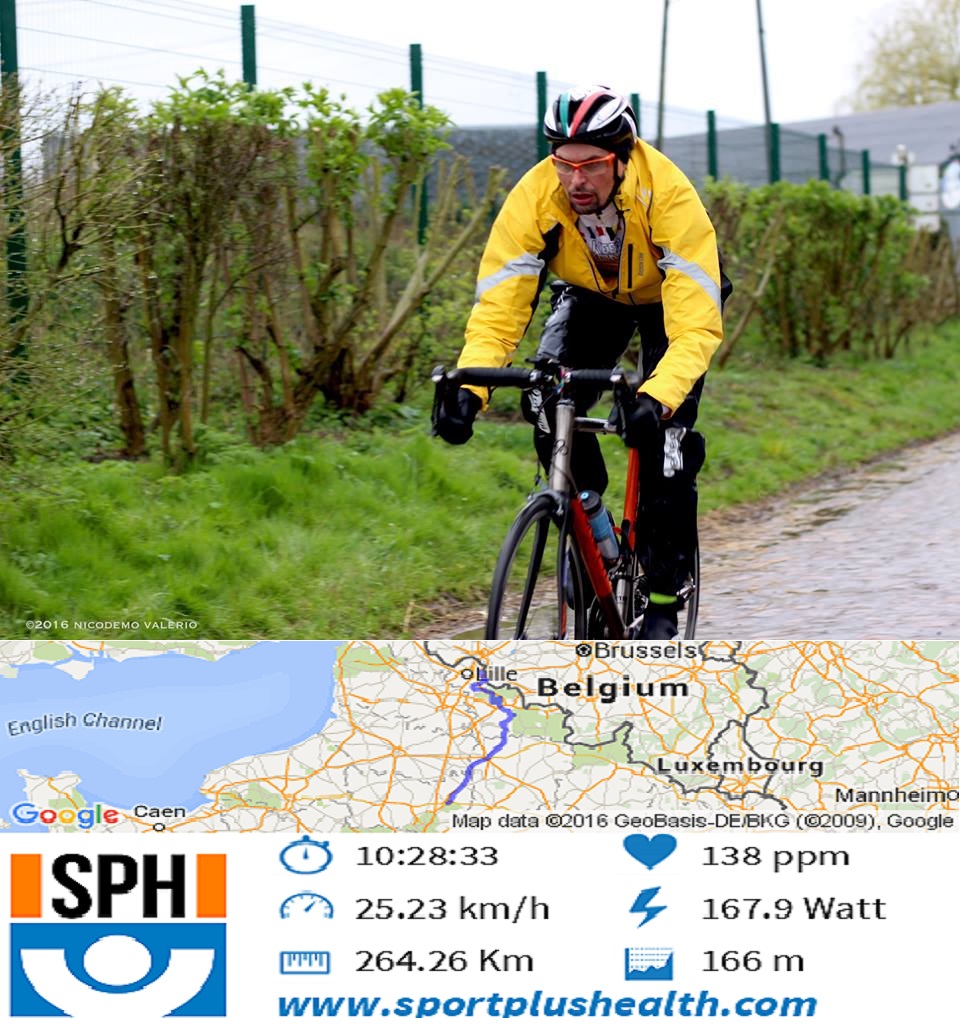 Thursday, April 14, the Tour of Flanders

The sun is shining today on Belgium, and the location provides a completely flat first part followed by a swing of 18 walls (short and hard climbs). Despite the more than 250 km in the legs from the tough race of the day before, Paolo has covered 260 km of Flanders without apparent difficulty, always with speed above 27 km per hour. “A great race, really beautiful” said Paolo when he arrived.

Sunday, April 3, a sunny day too, it was the 26 year old Slovak Peter Sagan (current world champion) to win the hundredth edition of the Tour of Flanders, again characterized by numerous falls. Behind him, the young Belgian Sep Vanmarcke granted the honors of war to the Swiss Fabian Cancellara, three-time winner of Flanders, in his last season, not competing in the sprint for 2nd place, leaving his rival a chance to enjoy the applause and cross the finish line alone in the place of honor. 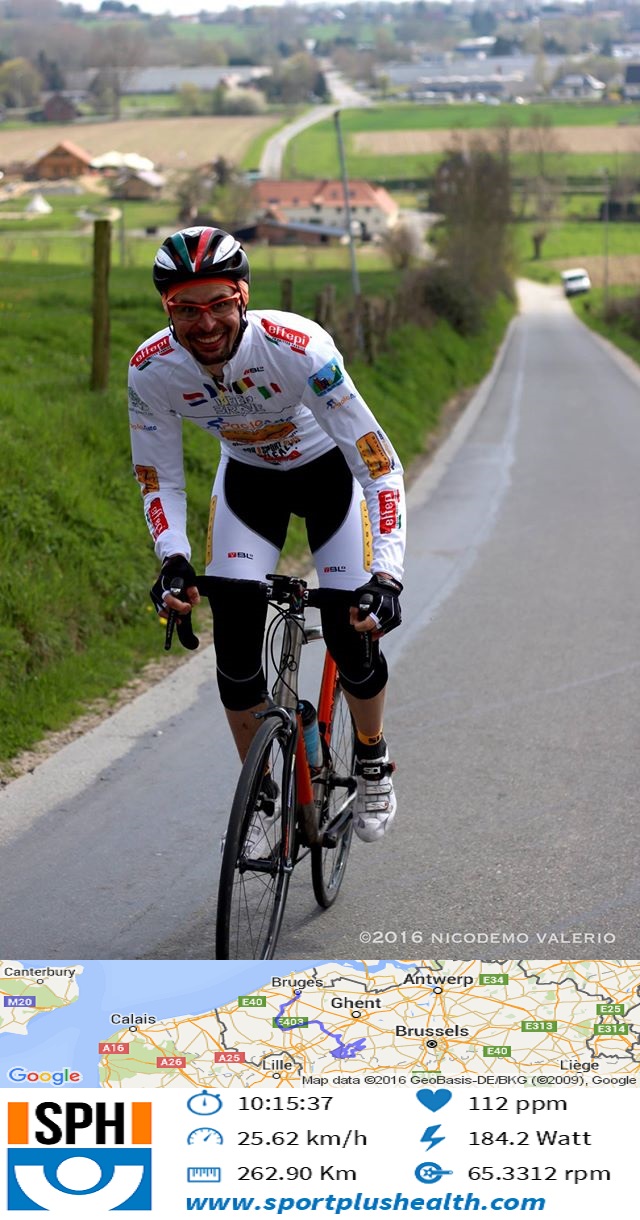 After more than 500 km in two days, one off it would not hurt. But standing still is not within the vocabulary of this great ultracycler, instead performing two races in one day, for more than two hours total on the pedals. 460 kilometers through Flanders in Ghent-Wevelgem, leaving at two in the morning from Deinze, in the rain, and arriving at 12:45 in Wevelgem, and still much to ride from 15:45 to midnight for the Wallonia tour.

What’s more having to ride at night and under the water, Paolo also faced a strong headwind. But as he said, in the end “The real ultracyclers are seen in time of trouble”. Thus the athlete has climbed other 18 walls, like the Tour of Flanders the day before. A continuous up and down through the rolling hills of eastern Belgium, with the typical short but hard climbs. One above all, the famous Kemmelberg, an uphill of 300 meters with the absurd gradient of 23%. Shortly after noon, the arrival, with the weather which fortunately slightly improved.

No time to breathe, and the team has moved in the direction of Marche-en-Famenne, where the second race of the day began, the Fleche Wallonne. A transfer along the whole Belgium, from Flanders to Wallonia. On paper, the Flèche (as they call this race in Belgium) is less hard than the Flemish sister, but has six major bumps called còte, the equivalent of the walls of Flanders. The 208 km route is spectacular, coming from the deep south through the rolling hills of the region. After a long stretch pretty easy, the path moves around the city of Huy, where Paolo addressed the six planned còte, including the most beautiful and spectacular one, the Huy one, a nearly vertical wall at the 22% which closed the adventure.

As for the “official” races, the victory, even in this case for the Slovak Peter Sagan at Ghent-Wevelgem, has been overshadowed by the tragedy of the Belgian cyclist Antoine Demoitié, run over and killed by a motorcycle. While the 80th edition of the Flèche Wallonne will be held Wednesday, April 20. 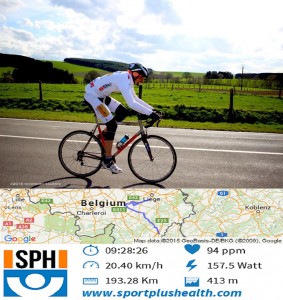 A legendary name for the oldest cycling classic (1892) covering the whole Wallonia from north to south and back, 270 km that begin entering the heart of the Ardennes and then up toward the center of Belgium.

They say that this race begins at km 190, since the last 70 are the hardest. Aste confirms, after having to climb a succession of climbs from the impressive slope. This is demonstrated by the time that was needed to complete the course, 12 hours, the longest race between those faced these days.

The cyclists entered the official competition will be challenged with this path next Sunday, April 24. 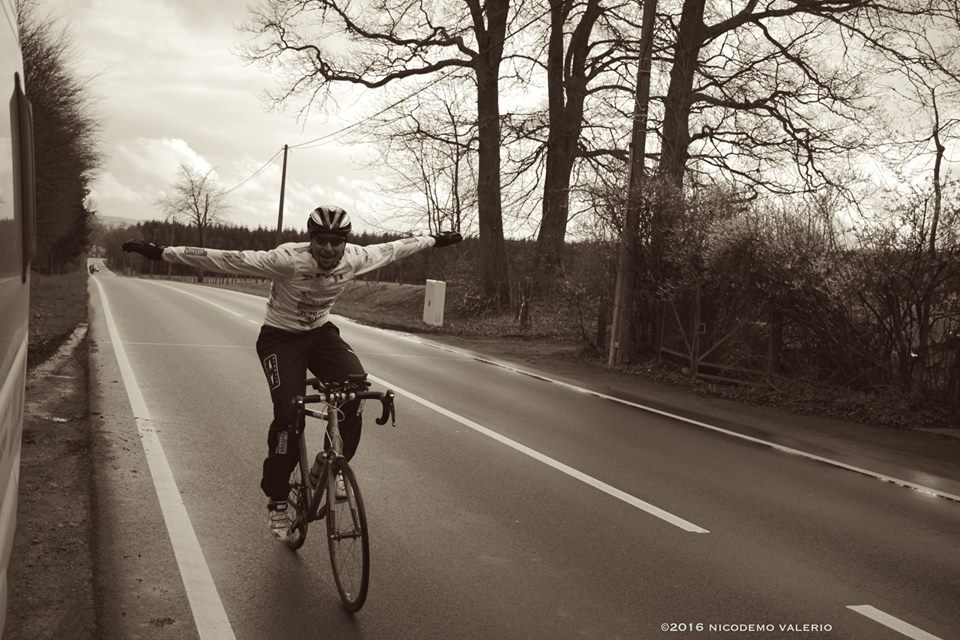 Soon with the last of the 6 Northern Classics, the Amstel Gold Race!

Paolo’s technical partner was the App Sport Plus Health, through which it was possible to follow live from the ultracycler’s website http://www.paoloaste.com/ the performance in terms of energy consumption, mileage and location.