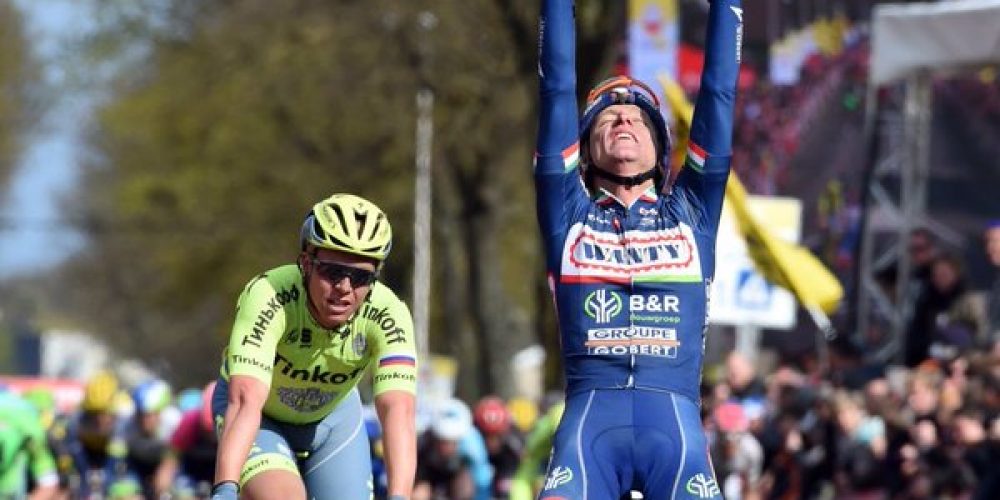 Wanty-Groupe Gobert rode this Sunday the Netherlands’ only WorldTour Classic, the Amstel Gold Race between Maastricht and Berg-en-Terbijt (248,3 km). After a second place in Brabantse Pijl, Enrico Gasparotto won a historic victory for Wanty-Groupe Gobert.

“I had incredible legs today. Everything went as we planned. It is the most beautiful victory for the team”, Enrico Gasparotto said. « The team did a really good job. We had a rider in the break and then Björn Thurau in a chase group. The rest of the team protected me very well. It was perfect. »

The team lined up with Mark McNally, Frederik Veuchelen, Marco Minnaard, EnricoGasparotto, Björn Thurau, Marco Marcato, Kenny Dehaes and Tom Devriendt. The first goal was to be in the breakaway. The breakaway of the day of eleven riders with our rider Tom Devriendt got the green light after an hour of racing. They received maximumlead of 4’45” on the peloton. At 62 kilometres from the finish, Björn Thurau attacked with three other riders in a chase group.

At 16 kilometres from the finish, the breakaway was caught by the peloton. In the first meters of the Cauberg, Enrico Gasparotto attacked. Nobody could follow him on the climb. The Dane Michael Valgren made it back to Gasparotto as they passed the summit. « I knew I had to attack because Orica-GreenEdge was controlling the race for Michael Matthews. If I had sprinted againt him, I would have been beaten. »

They rode together and increased their gap. Gasparotto beat Michael Valgren (Tinkoff) in a two-rider sprint. « I had to wait for the good moment because there was a huge headwind in the last meters. After the Volta a Catalunya I trained two weeks in Spain. I felt already good in Brabantse Pijl. This victory is for Antoine Demoitié’s family. Today, I had an angel on my schoulder. When I thought about Antoine, I went faster. »

« After the tragic event we hoped to win a race. This victory is a reward for the whole team. A WorldTour-race for a Pro-Continental team is fantastic. I would like to thank the entire team », an emotional Hilaire Van der Schueren said.

General manager Jean-François Bourlart spent the day with different sponsors. Both sponsor and Bourlart were extremely happy with this victory. « After the tragic event of the last weeks, this victory will provide happiness and support to the whole team. It is Wanty-Groupe Gobert’s most beautiful victory since the creation of the team. »