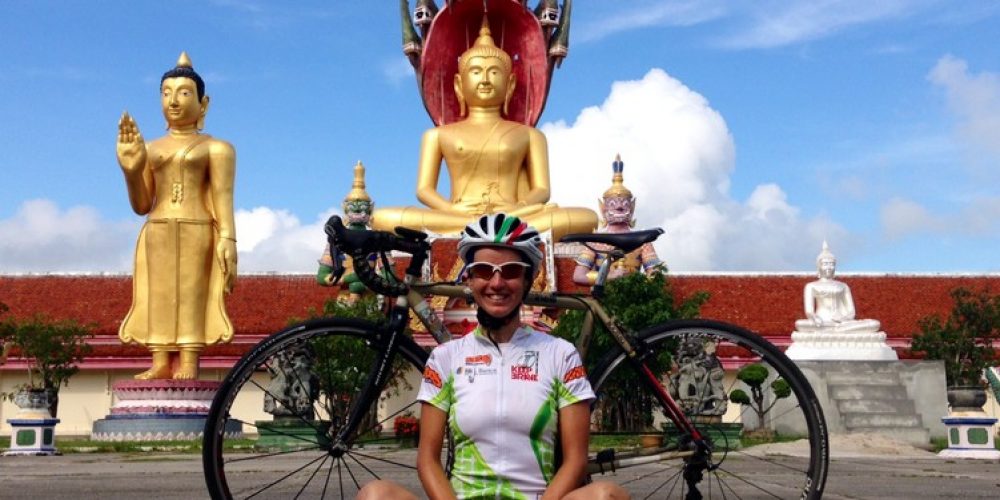 Singapore. Asia. The arrival of the airplane on which Paola Gianotti and her team fly is right there; they are travelling to gain the world tour record. It is 4:30 a.m., just a few hours of relax thanks to the time difference and it is time to climb into the saddle already. During this length of the tour, there will be no camper to follow them. The new option is bicycle-car, with a small car packed with baggage.

The first goal is to reach the Malaysian border (check this ride on our website). Despite the unbearable hot and the saturated air, Paola succeed in reaching it easily. The line to go past the border is somewhat tricky: the moped (and bicycle) line, on one side, and the car line on the other. Paola and her team end up getting lost in the Malaysian traffic, but an attentive police officer notices them and makes sure to have them reunited.

“I burn up between five and six thousand calories daily, in over one hundred stages”

“Rusk, jam, cereals, fruit, biscuits and tea for breakfast. I eat everything that passes along. Every hour, by bike, I eat. A bar, a banana, a sandwich, a bit of chocolate, a fruit. Gnam!”.

After a spare lunch due to the lack of local currency and a day spent pedalling, the group allows itself a stop in the city of Mersing. There is a lot of stress, because of the temperature, the time difference, the lost lunch, the line at the border…Lastly an “actual” meal made with very spicy chicken, rice and vegetables. And the well-deserved rest.

Days in Asia slip by in this way: it rains almost the whole day and it is complicated to get the bike outfit dry. Paola is very struck with the condition of women in the area. “I keep thinking about my and their condition. I decided to take my bicycle and go round the world, facing risks, cultures and above all my fate. Looking for my independence and freedom”.

The Thai border is closer and closer. They have to return the car they rented in Singapore and Davide, Paola’s fiancée, will drive them until Bangkok.

At the last minute however, when Thailand is very close, Paola takes a phone call from her dad: the arranged route is dangerous because of the armed fights between the Muslim rebels and the Thai troops. It is better to choose another route, to go past the mountains. It means another day by bicycle. This is the last thing Paola could desire, because of all that tiredness. Nevertheless, she must do it. When she arrives at the border beyond the mountains, she is exhausted, but she also rejoins with Davide. And it is ok.

“There are not mosques here, nor veiled women. Instead, chicken and rice are almost the same. I am charmed by the big statues representing Buddha, in the temples dedicated to Him”.

Along the Thai streets, Paola meets many Buddhist monks dressed in their saffron habits, and many, many children, who run towards her to say hello.

Asia was tiring but showed itself in all its charm. The return in Europe is upcoming and the homesickness keeps increasing.

“Deep green fields. Twinkling palms under the rain. I breathe in deeply the scent of the moist soil. I have been pedalling for thirteen hours now, but I could carry on endlessly. It is Hobo and I, one body cast on a single goal. Pedalling on the roads around the world in order to know, grow up and live”.