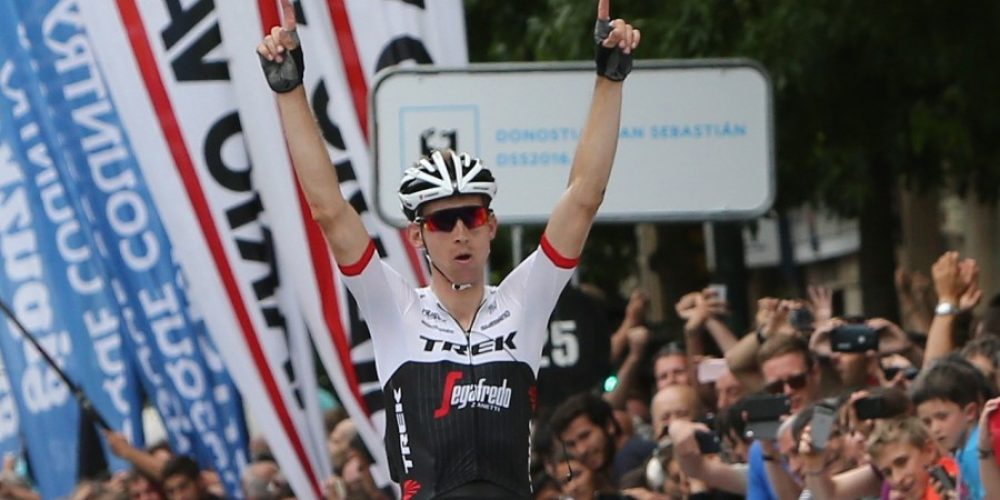 Bauke Mollema rebounded from the bitter disappointment one week ago when crashes ruined his podium chances at the Tour de France by soloing to his first WorldTour victory in Clasica San Sebastian Saturday.

“The last days of the Tour de France were really disappointing for me, and this was a good way to fight back,” said Mollema. “I recovered well from the Tour, and I am really happy to win, I have always loved this race. This is the first WorldTour classic I have won; I have always wanted to be on the podium of this race and have one of those Basque hats, and now I finally have one.”

The World Tour Classic, a 220-kilometer run through the Basque hills, all came down to the last, steep climb where four riders emerged at the top of the 1.8-kilometer ascent with gradients exceeding 20 percent: Mollema, Alejandro Valverde (Movistar), Tony Gallopin (Lotto Soudal) and Joaquim Rodriguez (Katusha).

Mollema, knowing he didn’t stand a chance if it came to a sprint, caught the other three by surprise by launching an immediate attack with just over eight kilometers to go.

Mollema’s advantage hovered around 10 seconds as the kilometers ticked away, and with three kilometers remaining it appeared the trio were about to tag him back. But no one wanted to make the last effort to close the gap, and his advantage grew again. Under the one-kilometer to go banner Mollema had 15 seconds, and in the final meters enough time to sit up and savor his first World Tour victory.

“Yesterday in training I did the last climb twice and three times the descent, so I knew what was coming,” continued Mollema. “I was a few places behind when Rodriguez went, and it was a narrow climb, so it was difficult to pass the other riders. But I felt quite good and knew that I could close the gap in the last few hundred meters of the climb. On the top, we were four and Rodriguez slowed down a little bit, and I think that was the perfect time to go.

“I just wanted to try something, and it was a good moment for an attack, it was still 500 meters flat at the top. I tried and saw I had a gap and then it was just full gas until the finish. I think with two kilometers more or less I knew I had it. I still felt I had some power in the legs, so I was not going to blow up, and when I looked back, I didn’t see the second group. I felt I could keep it until the finish – it was a nice feeling, especially in the last few hundred meters.”