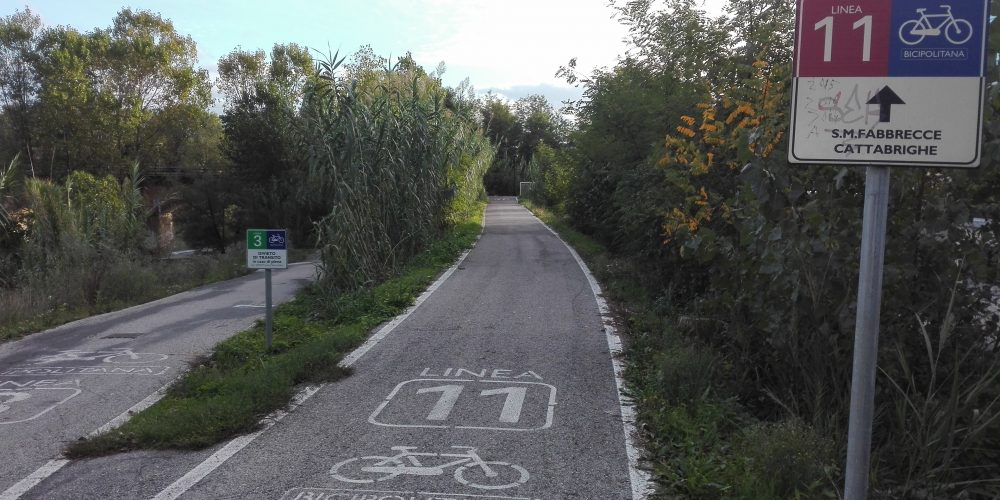 It is composed by a circuit of bike paths that follows the pattern of the subways from the greatest cities in the world. The cycling routes are the rails and bikes are the carriages: the Bicipolitana, realized in the municipality of Pesaro, runs on the surface in various lines, marked with different colors, and it is dedicated to lovers of two wheels and those who simply want to walk or run. This is built parallel to the roadway but also branching out into trails in the green along the river and the sandy coastline that leads from Pesaro to Fano. Today there are a dozen of routes ready for a total of 77 km of possible avenues.

During their design particular attention has been paid to the separation between the traffic of motor vehicles and the bicycles: the tracks are protected by a traffic island or built on lanes elevated compared to those for cars. Their width is 1.5 m, reduced to 1.25 m or 1 m in particular situations, as in the case of contiguous lanes. The average slope of each path is 2%, to allow anyone, even the less trained, to ride with any type of bicycle. The Bicipolitana is recognizable from special markings and signs: each vertical signal indicates the stops of the line while on the ground it’s shown the number or letter of the path.
The Bicipolitana project is part of the many initiatives of the Municipality of Pesaro for the promotion of sustainable mobility, to reduce car traffic and encourage the spread of the two wheels. For example, the city government has organized free public bicycle rentals at existing car parks to encourage the car exchange and a First Aid Service bike that allows the rider to find on a map the nearest workshop cycle in case of mechanical breakdown or flat tire.

From a monitoring on the rating and the type of use of Bicipolitana by its users, conducted by the City of Pesaro and funded by the Ministry of Environment, it was found that this is mainly used by cyclists aged between 26 and 55 years, for travel from home to work and home to study, since the highest peaks of use are recorded at the times of early morning and late afternoon. Over 75% of respondents said they use the trails throughout all the year and the same number said they do it for half or more of the usual way. The service, since it was born, has recorded an increase in its use from year to year. This depends, as recounted by the interviewees, from cost savings, the convenience /comfort of the service and the expansion of the network of cycle paths. The average length of the route taken by users within the urban area is reported to be 2.5 km.

The city of Pesaro, thanks to Bicipolitana project, in 2015 was awarded with a special mention in the rankings of Urban Ecosystem – Best Practices XXII edition of Legambiente.