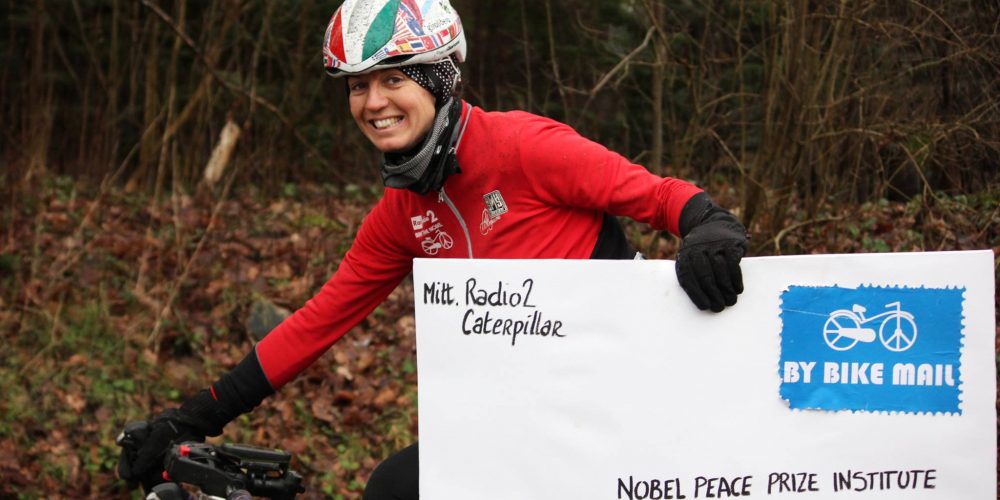 Just two days left to the arrival of Paola in Oslo, where she will nominate the bicycle as a candidate for the Nobel Peace Prize. We got in touch with her to know how the trip is going.

Here’s what she told us, before going back on her bicycle.

“This morning we start from Aarhus, Denmark. The trip is going very well, we left ten days ago and we went across the Switzerland, the country with more snow and cold because the temperature was between -5 and -6 degrees, so it was difficult to continue. Then we went to France, in Strasbourg, where I met the president of the transport commission in the European Parliament: they made me get into on my bicycle, something that had never happened before! This thing was very beautiful and special. Then we continued entering Germany, where we followed the entire Rhine Valley to arrive in Bremen and Hamburg, to reach the first stage in Denmark.

Today, we are going for the final Danish stage before taking the ferry to move to Norway. So far it worked out very well; the cold, as I said, was in the first part of the trip then the temperature has increased. It rained a few times along the way, but the nice thing is that I always rode on bike paths practically all over Europe, except in Italy. I also took a piece of the first highway for bicycles in the world, which is in Germany! For now they are just 5 km, but by 2020 another hundred will opened.
I am participating in a wonderful project. Every night we connect with Caterpillar on Radio 2: There are many people who are following us, which send their support and certainly this heart-warming. Once in Aarhus we met one of the promoters of Aarhus – European culture capitol 2017. He explained that Denmark, after the Netherlands, is the second country in Europe for bicycle usage and I really noticed it here as everyone rides a bicycle…

I greet you by saying that during the early stages of the journey the temperature was so cold that at one point the water inside of my bottle was completely frozen. For the rest great enthusiasm as always, the stages are between 150 and 180 kilometers per day, the weather is not so beautiful but the scenery is great and the fact of not riding on the road is really wonderful! Greetings to all SportPlusHealth supporters, we’ll speak again from Oslo. ”