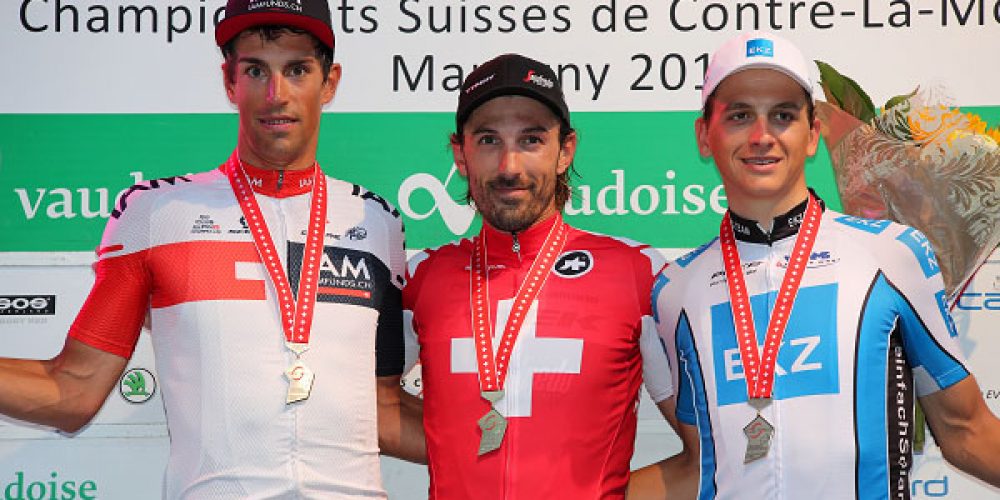 « It’s the last, and even though I will only wear this one for half a year, a title is a title, » said Cancellara. « I have to say it was one of the hardest ones. The parcours was technical, a lot of changing of rhythm, wind, and the heat – it was around 30 degrees (Celsius) – all made it pretty hard, especially after coming from the Tour de Suisse where it was cold and rainy. Today it was so warm, and your body reacts differently.

« When a time trial is almost an hour it’s never an easy effort. I feel sad for Stefan Küng because he crashed pretty hard. But I knew that on a hard course like this, you have to be really careful. It was the toughest course that I have ever done, I think. A corner, left then right, just a lot of things to take care of. But you go full gas regardless; you focus on yourself, and that is how you time trial always. »

Cancellara: « The Swiss championships have always been a part of my story, and I wanted to end it nicely this way. I wanted to participate in my last year as respect toward the championships I did always. Last year I wasn’t at the championships and this year to stand on the podium again, and hear your national anthem is really nice. Unlike other sports, we don’t have so many possibilities to hear the national hymns in cycling, so it is special; the only other time it’s possible is the Worlds or Classics. »