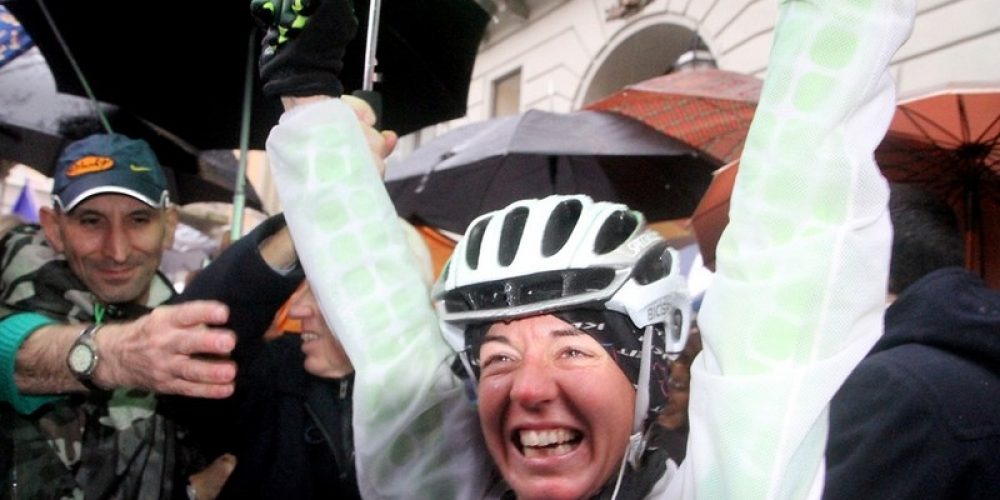 From Istanbul to Ivrea -almost- in one go. Paola Gianotti’s world tour is drawing to an end, with many memories filling your heart, the longing to go back home,but also a strange and early nostalgia for the travel which is about to finish. Here is the account of the last kilometres to the win of the Guinness World Record.

This time the landing is in Istanbul, a marvellous city between Asia and Europe. It is in daytime and at the arrival at the airport Paola Gianotti meets her beloved friend Paolo, ultra-cycler, who arrived by camper from Schio (Ve), and Nico, arrived with a flight from Singapore. After a coffee and a chat, they are ready to leave again.

She goes across Istanbul using continuously a stopwatch, there is no time to stop. After a few hours, Paola crosses the border with Greece. She goes along the coast until Albania, and then Croatia. The daily average of kilometres is increasing: despite some gaps it even arrives to 300, the departure is at 4:30 a.m. and the stop at 10 or 11 p.m. The record to beat is 152 days, everything it takes to stay within that number is worthy to be done. Once in Slovenia, it is just 100 kilometres until Italy. There is plenty of euphoria; they are tired, but they do not feel it. The first Italian stage is Trieste, in order to meet Giuseppina and Sebastiano’s family, who gave Paola teeth during her difficult moments with the accident in the United Stated. The tour restarts from Trieste in the early morning; virtually it is three thousand kilometres until the finish. They go along the Adriatic coast, it rains and it is cold. Paola’s encounters becomes more and more frequent, people follow her by bicycle for a while, wave their arms from their cars to greet and encourage her. They await her in the streets to take a photo, go with her for a while. In Cesena the city welcomes her and then Cesenatico, Senigallia, to meet her friend Carmen, a pizza in the camper with her and her family. They head for Apulia, Santa Maria di Leuca is fantastic at dawn. It is now time for Taranto, and Ilva, along with her red, dangerous, pollutant dust. The ride carries on until Reggio Calabria and the next destination is Naples. Here the welcome is great and crossing the city by bicycle is almost impossible. However, thanks to a friend who makes his way with a moped, Paola arrives in Pozzuoli. The weather forecast is unfavourable, the team is already on the Aurelian way and there are black thunderclouds in the sky. A police officer warns them that the Aurelian will be closed due to the weather conditions, for good measure. The only choice is the motorway, he says. By bicycle. Therefore, Paola and her team carry on their world tour on Italian soil and they do it on the motorway, no less. On the emergency lane. There is almost no one and it is getting dark. There is lightning on the horizon.

“We turn at the first exit for going back in the Aurelian. The water starts raising in the streets and we are stuck again. We have to stop and wait for the situation to get better. I am on time, but I cannot permit myself to stop for too many hours. I check the weather forecast again and it seems to get better. We sleep for some hours and around three o’clock we restart. The Aurelian way is open again”.

The ride proceeds quickly towards Viareggio. Second last night stage. Paola sleeps a few hours, the adrenalin is high. They restart to face the Cisa Pass. It is foggy and it is cold. It is the last climb of this world tour, now Paola flies home.  The destination is to reach Pavia, here it is. It is just 115 kilometres to the final arrival.

One hundred fourteenth day. The waking up is thrilling, the band is very excited. “The energy charge of this morning is incredible. It is bloody cold, the sky is growing cloudy and it is about to rain. But nobody cares. We are all so excited we could swim in the adrenalin we have”.

With a speed of thirty-two kilometres per hour, by now Paola is almost in Piedmont. The people drawing up alongside her by car to greet her becomes increase in number. The sky is still dark, but the cyclist’s mood is not, not after one and a half year since the day of departure.

“Just like Carmen Consoli’s song, I’m confused and excited and I keep pedalling, I already smell home. These are roads I know very well, I often did them during my training and retrace them after a world tour moves me”.

After going past Santhià with its square packed with people, it is time to come back home. Ivrea is close. “Come on Hobo, we are here, we are close. It is not a piece of steel, it is my bicycle. I share with it all those kilometres, all those moments. It is the world tour bicycle. A Guinness world Record world tour. When I see the sign of Ivrea I burst into tears. So much”.

There is the arch marking out the finishing line. Paola did it. She realized her dream, the world tour by bicycle, first Italian woman and second woman in the world.