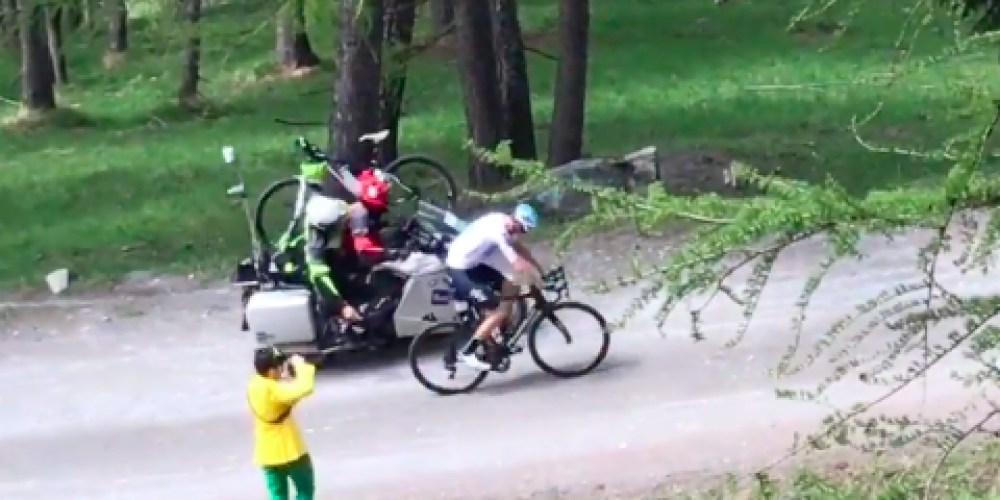 BARDONECCHIA: Everything or nothing. This is the thought processed by Chris Froome yesterday evening when, after dinner, he found himself on the motorhome of the team and has pitted some simple considerations, the first one of a personal nature. “A placement in the Giro d’Italia does not change my career, I came to win and I want to do it at any risk“.
The second one is of an exquisitely technical nature. “I feel better, I left behind me a series of bad lucks and in the third week I always went strong. I am a long-distance runner, I have a great experience and I want to try the challenge“.
The Sky team plan has started immediately with a staff meeting. EVERYONE CONVOCATED as the title of a well-known radio show. The climb chosen was that of Colle delle Finestre, an ascent that had already been tested in the second Giro won by Paolo Savoldelli and in that of Alberto Contador and able to make important gaps. To make the best, it was important to have trusted men scattered along the entire ascent.
Every 3 km a masseur was able to offer a flask of salts or water. During the maximum effort, when the “smoothies” were reviewed, it was important not to run into a food crisis. For this reason, this was calibrated according to the attack. The most difficult thing, once shot, was to face the flat stretches in the valley, with the wind, yet the gap never hinted to diminish.
The captain of Sky, to complete the 184 km of the Venaria Reale – Bardonecchia, took 5h09′ in which he pedaled at 35.3 km/h in average, reaching the maximum speed of 84.9 km/h.
When he sprinted at 6,7 km from the top of the Colle delle Finestre, it made a “shake” at 29.4 km/h and then continue at 16.7 km/h in average for 24’08”. To end up the next descent, he took 12’15” with 53.4 km/h on average and even hit the top speed of 80.1 km/h. 16’16” was necessary to climb the Sestriere to an average of 23.2 km/h and 30.9 km/h of maximum speed.
Important numbers but this time the British man, once started, has resected everything and put the heart beyond the numbers. Bravo Froomey, an evidence of the past for the most modern runner. It was not difficult to predict a growing Giro for him and we had told this too. Now they will have to face the Ventolin and we wish the best possible result to the champion.
Finally 2 notes of merit: Tom Dumoulin confirms that he is a top valued rider. Simon Yates ran great and then inevitably paid, but also in this case this could be expected. 3 causes: Inexperience, expensive race conduct, season started too early …
Download Sport Plus Heath and start training like a champion.