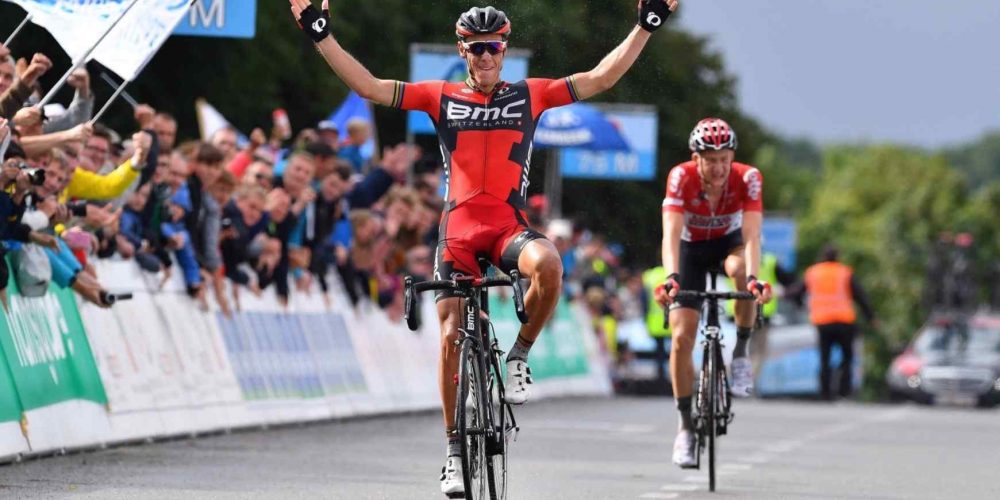 Philippe Gilbert has become the Belgian Road Race Champion for the second time in his career, defeating Tim Wellens (Lotto Soudal) in a one on one battle to the line.

Greg Van Avermaet rounded out the podium in third place for the second consecutive year.A 25-rider move, including Gilbert, Van Avermaet, Dylan Teuns and Loïc Vliegen, went away early in the 231 kilometer race. Gilbert launched an attack with just under 50 kilometers to go and was followed by Wellens and Laurens De Plus (Etixx Quick-Step), who was later dropped, leaving Gilbert and Wellens to go head to head for the win.Gilbert launched his last attack within the final 300 meters to secure the Championship.

Quotes of the Day

Philippe Gilbert: “The bunch almost came back to the breakaway on the climb when we were inside the last four laps and I saw them so I attacked on the top. My goal was not really to go away but to speed the pace up and get the group working again. Greg went after and then I went again with Tim Wellens. I knew that if I went alone I would have teams chasing behind me so I needed a Lotto-Soudal rider with me. It worked well to have Wellens with me, and also Laurens De Plus, so the three biggest teams were represented up the front and no one was really chasing. It was the perfect trio.”

“When De Plus was dropped I was thinking that this might not be good as Etixx Quick-Step would be riding behind us, but in the end we held the gap. The final was a hard one because Wellens went full gas. I was able to respond to his attacks and I was always there, really focusing on the sprint. I didn’t want to start playing too far from the line in case the others came back, so we really waited until the last kilometer. I was nervous because I wanted to win so much. When you are in this situation it is there that you make mistakes. So I was trying to think positive thoughts and think of my family and my future, and not going crazy. That’s what I did and that relaxed me a bit.”

“It’s completely different to my first championship. When I won in 2011 I was in the best period of my career. I wasn’t expecting to win then because the course didn’t suit me too much. But here I was working really hard after my accident in April to get back to this level. I was already happy after the Tour or Luxembourg as I felt some good sensations. Then at the Tour de Suisse I wasn’t sure how my level was, but then I was back feeling good in the last days. This win gives me a lot of confidence and I’m looking forward to wearing the jersey at the Tour of Poland.”

Valerio Piva, Sports Director: “It was a good early move that went away in the second lap, like in the last couple of years. Last year we missed the move and chased all day and in the end we had third place with Greg Van Avermaet. This year it was clear that we needed to pay attention so everyone was ready for the move. 25 riders went with Philippe Gilbert, Van Avermaet, Dylan Teuns and Loïc Vliegen. Dylan and Loïc did a fantastic job to set the pace and protect Philippe and Greg, our leaders.”

“With 3.5 laps to go, Philippe went with Wellens and De Plus. De Plus was dropped but Philippe and Wellens established a gap of over one minute and Greg was behind in the chase group protecting Philippe, jumping in every counter attack. Everyone was riding for the team today. I am proud for Philippe, especially after the bad luck he has had this year. It was a nice victory and he deserved it. All of the team deserved the win today, they all played a big part in it.”