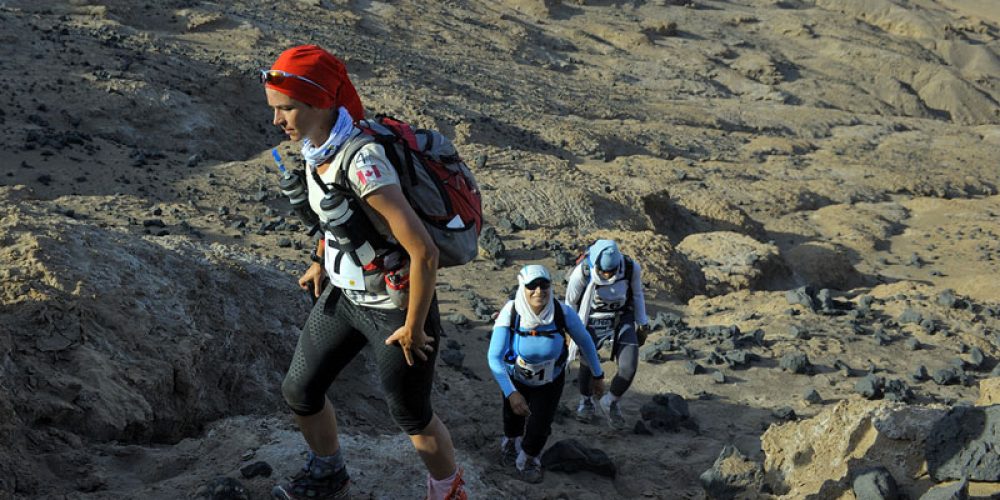 Whoever is the winner, in this stage the 250k runners have made a real record: step, walk and run in the hottest place in the world.On the volcanic platform of Gandom Beryan were recorded for the last three years, temperatures that roamed around 70 degrees. The appearance of the plateau is surreal: a strewn with black stones producing a metallic noise when beat against each other. It’s impossible to remain still in front of this place, the landscape from up there is amazing: a large part of the Lut is displaying in front of one’s eyes, including the salty river.

The weather was not the most lenient: well over forty degrees. Runners have had to deal with the heat, and also to the base camp – caravanserai of Nader – electronic equipment went very close to the stop for the excessive heat. The first to get to the end of the stage was Rafael Fuchsgruber, the German leader of the 150k. He got there quite fresh, and even had time to go back a few hundred meters back to give some water to his friend and colleague Mohamad Ahansal, leader of 250k, who arrived about twenty minutes later.

Then Fabio Ferrario, the Milanese outsider with his bike, made his entrance to the caravanserai. Giuseppe Derosa (150k) then crossed the line, although suffering from a knee pain that has tormented him for a long time, followed by the italian “icon” Alberto Tagliabue, a fantastic runner that keeps grinding kilometers like nothing happened. The Norwegian Frode Lein arrived shortly after, putting in his pocket a really nice time despite his back that still causes some problems. Frode has also patented the “base camp shower” by piercing a stopper of a bottle, solution highly appreciated by all, that from then on it became a finish line “must” have”. Volunteers and staff have worked in every way to ensure that runners were protected against heat exhaustion, and some people went from one to another cp walk bringing water to sprinkle the athletes. A volunteer who has walked for several kilometers has been taken to the medical for a drip, it is fine now.

Nicola Ciani and Roberto Zanda, respectively third and fourth in the overall standings, only separated by 13 minutes, arrived together at the finish line after running in parallel with the last part of the stage. The Lebanese Imad Ladkani just arrived at the camp has praised the beauty of the stage – but also its difficulties in the last part, when fatigue and the heat mix with the hard terrain.

The first woman to complete today’s course was Jenny Davis, that kept on and found her pace getting a pretty good time. Giovanna Caria (150k) arrived rather than exhausted, and it took an intervention of doctors and nurses -always precise and professional – to deal with her situation: she suffered from sharp pain in the back, sore shoulders and feet (and she was on the verge of heatstroke).

The Sardinian athlete was invited to stay in the medical tent for about 1 hour. It ‘was then the turn of stainless iranian Vahid Reyhani, which improves stage by stage, and ranking rewards him. Christoph Harreither, the long-legged Austrian, arrives with a time of 7.47, and the italian Laura Ricci, along with Gian Carlo Enna, reached the camp after about half an hour. Laura suffered the heat enough, and in a couple of occasions has admitted to having had hallucinations “Once I thought I saw Tagliabue and Ahansal, another time I thought I had a scorpion in my shoe!”.

The other Lebanese runner, Moustapha Ahmad, has then joined us at base camp. Rounding out the rankings of the day Alireza Saadat, the courageous Masoumeh Torabi who suffered pain and blisters on his feet, his mentor Stephanie homes and, almost at sunset, the Iranian Farhad Shirzad. We then had the pleasure of meeting the Minister of Culture of the region of Kerman, who spoke at a small reception in honor of ISRU and runner. The delegation made a special message to the participants from the voice of Professor Rashidy, the “father of Lut”, and have been given beautiful roses . Tomorrow long section… some runners are a bit worried, but their spirit will prevail.