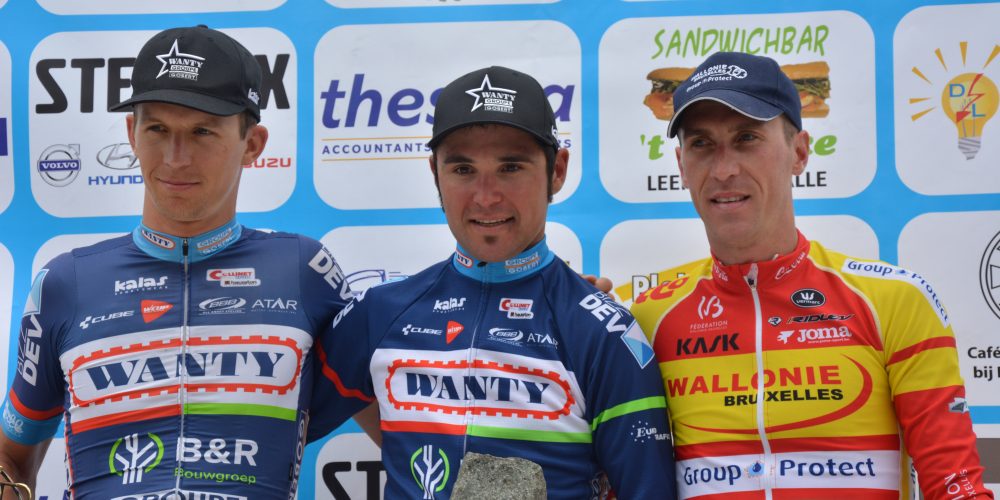 Jérôme Baugnies got this Wednesday the sixth victory of the season for Wanty-Groupe Gobert in the International Wielertrofee Jong maar Moedig – Oetingen (1.2). The success of the Wanty-Groupe Gobert team was complete when Dimitri Claeys mounted the second step of the podium.

“We really did a great team race. I’m happy to win after a disappointing Belgian championship”, Jérôme Baugnies said.

In the first kilometres the sequence of climbs and the high pace shifted the peloton into many parts, perfect for an attacking race. “This is a difficult race because it is very hard since the start with many climbs. It makes the race difficult to control from a tactical point of view.”

On the local laps 21 riders got clear including three riders of Wanty-Groupe Gobert – Mark McNally, Dimitri Claeys and Jérôme Baugnies.
On the last climb of the day Jérôme Baugnies attacked. Nobody could follow him and he crossed the line alone, his second win of the season after a stage in the Rhöne-Alpes Isère Tour. “I think I was the best today. I didn’t want to wait for the sprint because there were dangerous riders. I was in the lead straight from the start and I showed that my condition was good.”

“I was trying to win this race for a couple years because I live at only 10 km from Oetingen. There were a lot of fans alongside the roads. I enjoyed it.”

Sports director Hilaire Van der Schueren was obviously satisfied. “After the disappointing result on the Belgian Championship we must react for our fans. Today it was perfect. Everyone did perfectly his job. Baptiste Planckaert was certainly dangerous for the sprint. Mark McNally stayed all the time on his wheel. We really dominated the race”, he concluded.