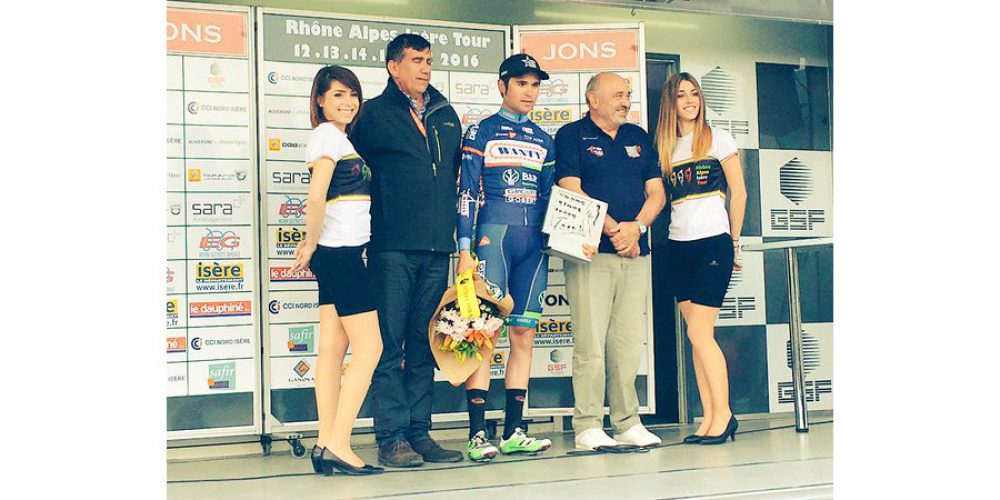 “It is a collective victory. I’m happy to win after bad classics. “, Jérôme Baugnies said after the finish.

With 42 km to go, four riders of Wanty-Groupe Gobert were still present in the small peloton of 22 riders : Frederik Backaert Jerome Baugnies, Guillaume Martin and Marco Minnaard. At 40 km from the finish, Marco Minnaard attacked with the leader in the GC Lennaard Hofstede and the Spaniard Benat Txoperena. The three riders were joined a few minutes later by Jérôme Baugnies. “I knew that Marco Minaard already gave a lot during the stage. The peloton didn’t ride fast enough. So I decided to bridge the gap myself “, Jérôme Baugnies explained.

The peloton didn’t see them anymore. At 6 kilometres from the finish, Jérôme Baugnies launched the decisive attack. ” The Spanish rider didn’t want to share in the work. I was afraid of the sprint. I decided to attack. He first tried to follow me but I finally increased the gap “, he continued.

Jérôme Baugnies crossed the line 22 seconds ahead of his teammate Marco Minnaard. “It’s been a rotten season so far. I came back during the Four Days of Dunkirk. I am happy to get in shape for the Belgian Championship.”

With Frederik Backaert, 7th, the team Wanty-Groupe Gobert had a third rider by the first ten. Jérôme Baugnies is now second in the general classification. Guillaume Martin stays 8th. “We made an amazing team race. We reached our goal. A stage win and the podium in the GC. Tomorrow we only have to control the race”, sports director Jean-Marc Rossignon concluded.

The last stage takes place tomorrow between Jons and Charvieu-Chavagneux on 168.5 kilometres.