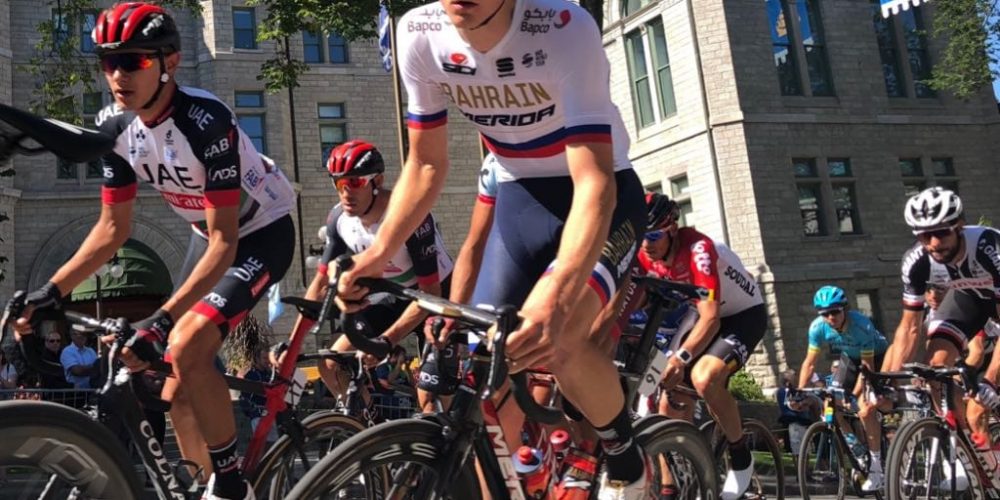 The Slovene Matej Mohorič is among the greatest promises of contemporary cycling. A boy with a sharp mind, he was born in 1994 and in his career he has already won the World Junior 2012 championship title, as well as the Under 23 in 2013.

He is currently being a member of the Bahrain Merida Team, of which Sport Plus Health is partner.

We are just back from the World Championship in Innsbruck, where we witnessed to the explosion of the Belgian talent, Remco Envenepoel. Therefore, no one better than Matej can explain to us which path a young sports promise is supposed to choose when they consider undertaking professionalism.

“Given that I do not know Evenepoel personally, and that I can’t speak for him.”

However, the Slovene shares his thoughts on the approach a young man needs in order to not lose his way in the world of professionalism.

“First of all, a young man has to believe in his own means. The work pays always back and because of it, he must keep working hard, just like he did in the junior categories. If a person keeps cycling, training well, eating well and having some rest, sooner or later they are going to be competitive even among professionals”.

During your path of growth, have you found reference figures that have helped you to grow?

“To the present, I have worked with many people who helped me. Already before moving to professionals, for example, I have been with my Slovene Sports Director for eight years.

Then I moved to Cannondale, the former Liquigas, and there I have found people whom I learned a lot from. But I have to say that, step by step, they have all been enlightening. After some years of experience, now I can say to know myself better to some extent.”

Are there differences among the talents, regarding the stage and one-day races?

“Those who run in one-day races have to be explosive, whereas those running in the stage ones need much more endurance. The training is adapted consequently. The most important thing is not just having a physical talent at disposal. You need the will to do well, to sustain the sacrifices and to carry on the work that is supposedly needed in order to reach your goals. Our life is not just what people get to see on TV. Daily life is made of a lot of traveling, and many other things you have to consider. There are several sources of stress, but it is our job. It is difficult to make sacrifices when you are under pressure, being away from home for a long time, with other stressful factors piling up to the rest.”

How did you deal with this phase of growth?

“I’ve had my difficulties with how to undertake travels and to organize the time I spent away from home, too. Step by step, I got used to it and I stopped thinking about it. I learned how to live being more relaxed, and I am less stressed than before. When you are stressed, you can’t perform well. I’ll give you an example: my partner Vincenzo Nibali doesn’t feel stressed very much, even during the most important moments. He is calm and this allows him to achieve the best, getting excited at the top events.”

What makes you relax, Mathej?

“To me, it is important to know why I am doing what I am doing. Even if you are far away, having the knowledge that all of it is useful for you and your family. All of it, it helps to make you relaxed. Besides, everyone has their own habits, like reading a book or watching a movie. It is normal, we are all different but we don’t have to overthink the technical gesture and do something else, too.”

It is a demanding profession, but it gives you important satisfactions.

“It is true, but sometimes living as a cycler 24h is hard. You wake up, eat wealthy and rest. It happens to be outside for six hours in a row when it’s pouring down and you think about your friends working in an office.”

What advice would you give to a young man who makes it and loses his securities?

“When you make it, you are not at the level of others, who have been professionals for years. Sooner or later your time comes, you have to hold on, as I said before.”