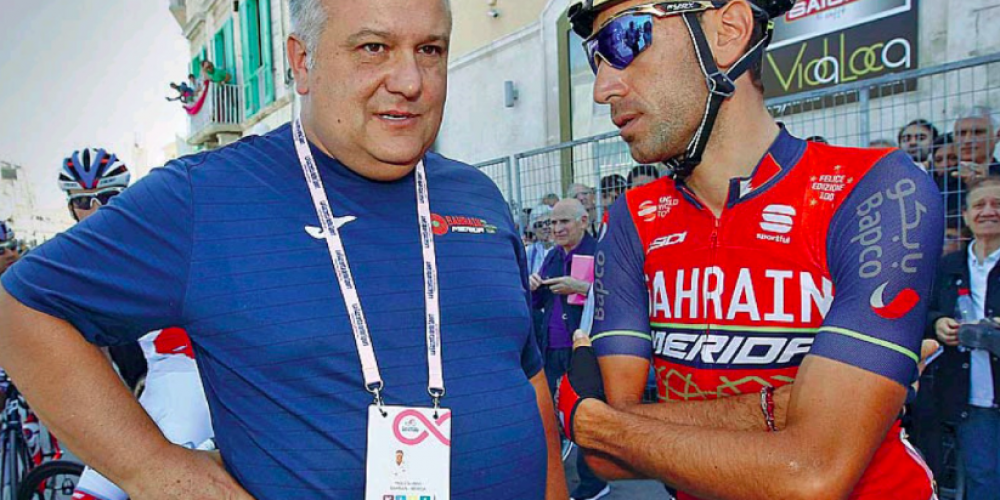 NIBALI: WHAT A SURPRISE.. OR MAYBE NOT. PAOLO SLONGO’S WORD OF HONOUR

At the start line, in the square in front of Milan’s Sforza Castle, team Bahrain Merida is getting ready to set out on a Milan-Sanremo edition that promises to be very wet. Other riders are the favourites for the race, and as a matter of fact the spotlight is turned on Sagan and Kwiatkowski.

The preparation goes on steady, but it’s not relaxed. Plenty of fans out there, but the rain is pouring down and the riders take shelter in the motorhome, right until the last minute. The official start is scheduled for 9:45. At 9:30 Paolo Slongo leaves the bus as well. He is the man who has been protecting the secrets of Vincenzo Nibali‘s preparation for years. He looks after the rider since his seasons in the Liquigas team, when the champion from Sicily managed to step up onto the podium of ‘La Classicissima’.

Paolo sees us and waves. We really don’t want to disturb him but he comes close for a quick word with us. We ask him if he has any surprise in store. He stares hard at us, and his eyes confirm that it could well be. He lets it slip and adds “We will come up with something. We feel great today”. A very clear indication of optimism. Slongo does not have a pre-tactical way to do things: only 15 days ago, before Tirreno-Adriatico, he spoke to us. “At Tirreno [-Adriatico] we will not be ready enough for the podium, but we are not too far neither. We had a few issues during the preparation, like in Argentina, when Vincenzo got sick and lost a few days of racing”.

The Italian stage race (Tirreno-Adriatico, in fact) helped ‘The Shark’ get the right pedal stroke. “We managed to work on sudden changes of pace in climbs and on ‘over-rev’ kind of efforts. An excellent preparation”.

At Sanremo everything went really well, with a thrilling finale, like in a movie. Nibali himself added “I knew I had good legs when I was on Cipressa; by when we reached the Poggio I couldn’t wait for someone to sprint. What else can I say? An immense joy, I cannot believe what I have just done”.

In the coming days we will reveal other details of the partnership that in recent months has seen Bahrain Merida and Vincenzo Nibali collaborate with SportPlusHealth. The new Android App is available now. Soon for iPhone as well