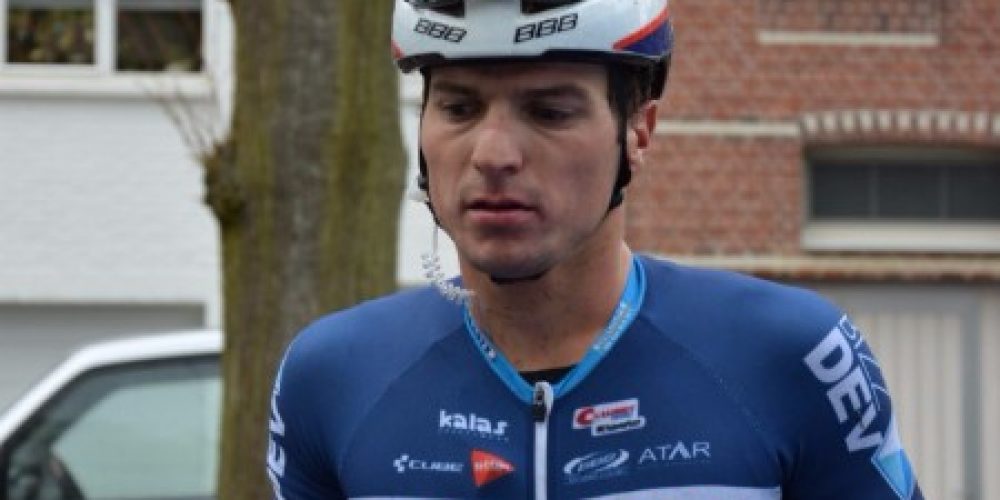 The Scheldeprijs traditionally forms the transition race between the Tour of Flanders and Paris-Roubaix. The 200-kilometre race between Antwerp and Schoten usually finishes in a bunch sprint. For this 104th edition the organizers had the three best sprinters of the world  at the start in Antwerp: André Greipel, Mark Cavendish and Marcel Kittel. With a 14th place, Roy Jans was our best rider at the finish in Schoten.

“I can’t be satisfied with this 13th place. I was bad-positioned in the final. I couldn’t really sprint today”, Jans said after the arrival.

Very early in the race, a leading group of six riders, without representation of Wanty Groupe Gobert, got a lead of nearly five minutes. Jerome Baugnies tried alone to close the gap, but came no closer and was caught by the peloton. «I was not happy with the fact that we missed the breakaway. On the other hand, I knew that the breakaway did not have a chance. It was not so bad », sports director Hilaire Van Der Schueren relativizes.

The peloton had the breakaway under control. The leading group was caught at 60 kilometer from the finish. Just before crossing the finishline for the first time, Frederik Backaert attacked. He rode 25 km at the front with Brian Van Goethem. Just after the third finish crossing they had caught the lead group back. « With the crosswind, I wanted to try something. That was a good test against Paris-Roubaix. I am now totally ready for the Hell of the North. »

At 25 kilometres from the line the eight mentioned Wanty-Groupe Gobert were all in the main peloton. The preparation for the bunch sprint went without incident and we got the expected bunch sprint. Marcel Kittel was the strongest of the pack. Roy Jans could not really fight againt the best world sprinters and finished the race at the 13th place. « At five kilometers from the finish, I lost a few places. Robin Stenuit brought me forward. In the last two kilometers I was alone. It went very fast. I couldn’t really sprint », Jans explained.

Sports director Hilaire Van Der Schueren was satisfied with the performance of his team. « I think that the team did very well today. Frederik Backaert is now ready for Paris-Roubaix. This race is traditionally very dangerous. Some riders did not take any risk in order to be healthy for next Sunday. »

Wanty Groupe Gobert was also active in the Circuit de la Sarthe in France. After the first stage, they were two stages scheduled today  with a morning stage of 95 kilometers and an individual time trial of 6.8 kilometers in the streets of Angers. With a fifth place this morning and a ninth place in the time trial, the team Wanty-Groupe Gobert can look back on a successful day Wanty Groupe Gobert.

This morning, the early breakaway was caught in the last meters. Bryan Coquard won the bunch sprint. Our Italian sprinter Danilo Napolitano took the fifth place. “The team worked well for me. I was hoping for a better result, but it was a tight and dangerous sprint because everyone had fresh legs,”Danilo Napolitano recalls.

In this morning stage, Gaëtan Bille took one seconde time bonus. He climbed to the sixth place in the general classification before the start of the time trial. In the time trial he did very well with a ninth place at 17 seconds from the winner Anton Vorobyev (Team Katusha).

With two stages to go, Gaëtan Bille is seventh in the overall standings at 2’39’’ of Marc Fournier (FDJ). Tomorrow, the queen stage takes place with a lot of short climbs. « If Gaëtan has the same legs as today, we can expect a great result », Jean-Marc Rossignon concludes.