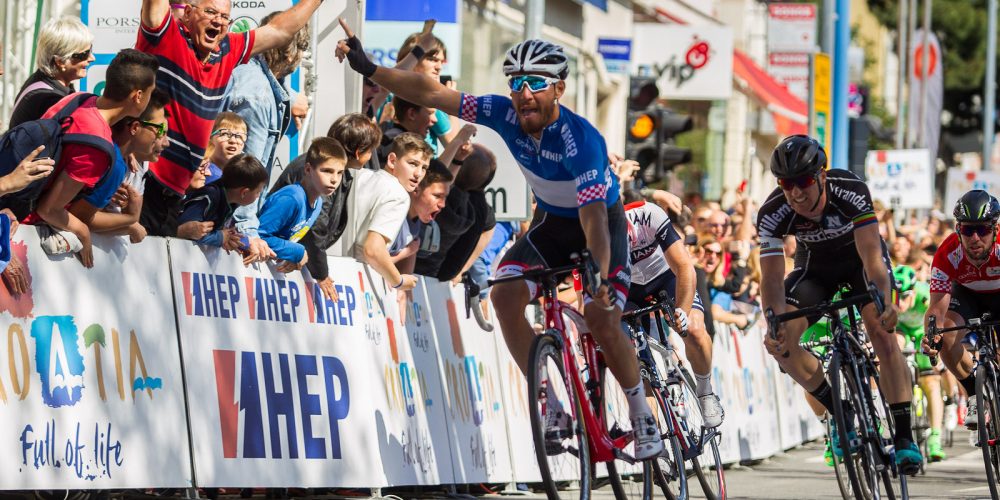 Giacomo Nizzolo sprinted to the win in stage three at the Tour of Croatia capitalizing on a flawless team effort to catch the breakaway with one kilometer to go and then set up Nizzolo with a textbook leadout in another twisty finish.

“It was really fast to get the breakaway back, and the guys did a perfect job in the leadout, so I had to win,” said Nizzolo. “All day we rode well, the circuit was hilly and before was tough too, harder than last two days. I am feeling good and I was confident for the sprint, but at the end, I was scared because I could not shift into my biggest gear. My cadence was really high, but it worked out with the perfect lead out.”

A six-man breakaway animated the 190.8-kilometer stage and Dimension Data, with the onus of the leader’s jersey, policed the move; Trek-Segafredo helped control the escape group using the hardworking Julien Bernard in the early grunt work.

In the closing kilometers, the breakaway still had a hefty lead; it was looking to be close if they would be pulled back in time. Trek-Segafredo put all hands on deck using climbers Riccardo Zoidl and Julian Arredondo to set pace on the final climbs until Eugenio Alafaci and Gregory Rast finished off the pursuit in the downhill and flat run-in.

The six leaders were swarmed under the flamme rouge signifying the final kilometer where Boy Van Poppel and Edward Theuns performed the final touches, setting up Nizzolo perfectly and giving the team its second victory of the tour.

“After the feedzone, about half way into the race, Tinkoff put one rider to help Dimension Data, and I put Julien Bernard to help in the chase; he worked hard yesterday and again today,” explained director Dirk Demol. “Then with 25kms to go, from one moment to another, the gap went suddenly from 1 minute and 40 to 2 minutes and 10 seconds. So then I said it’s going to be tight, and I had Riccardo (Zoidl) and (Julian) Arredondo pull.

“The whole team was involved in bringing it back. Yesterday, in my opinion, in the last 100 meters he was the strongest, so we believed 100 percent Giaco could win again if it came to a sprint. It’s always great to have a win, but even better that the team is there and all a part of it.”