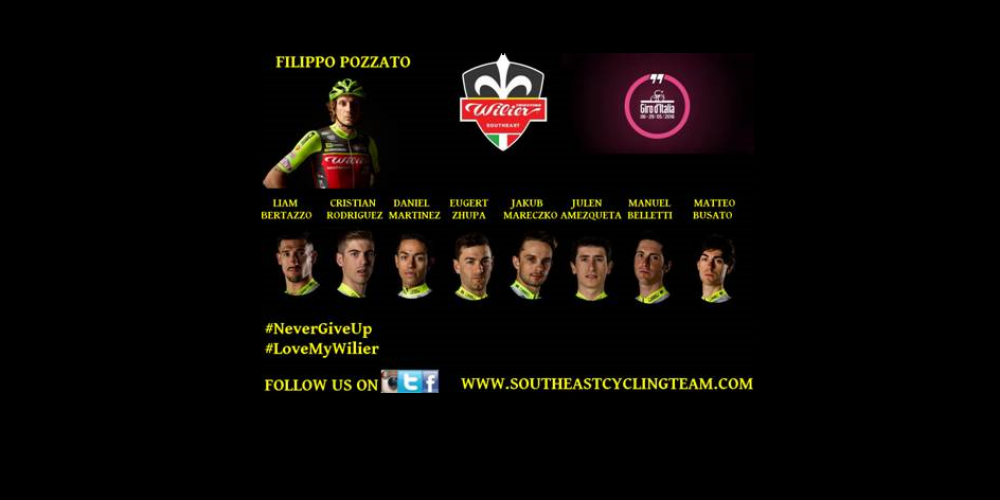 Youth power for Wilier – Southeast that will bring to the Giro d’Italia a young and ambitious group with the target of a stage win.

The team, that will be directed by Luca Scinto and Serge Parsani, will have as a captain Filippo Pozzato at his sixth Giro d’Italia where he won a stage in 2010.

In the same year also Manuel Belletti was able to reach the victory in the Corsa Rosa and he will try to repeat it in this edition as he’s gonna be one of our fast wheels together with Jakub Mareczko, at his first Giro d’Italia after the recent win in Turkey.

Second time at the Giro for Eugert Zhupa and Matteo Busato, with the veneto rider who went really close to a stage win in 2015 and who showed great form in these first months of the season where he competed at the top on every route achieving eight top 10.

Like Mareczko, four of our riders will make their debut at the Giro d’Italia starting from Liam Bertazzo, great rider for the flat stages, and continuing to our young climbers, the colombian Daniel Felipe Martinez, only 20 years hold, and the spanish Julen Amezqueta and Cristian Rodriguez.

We are ready to show that we deserve a spot on an important scene like the Giro d’Italia.