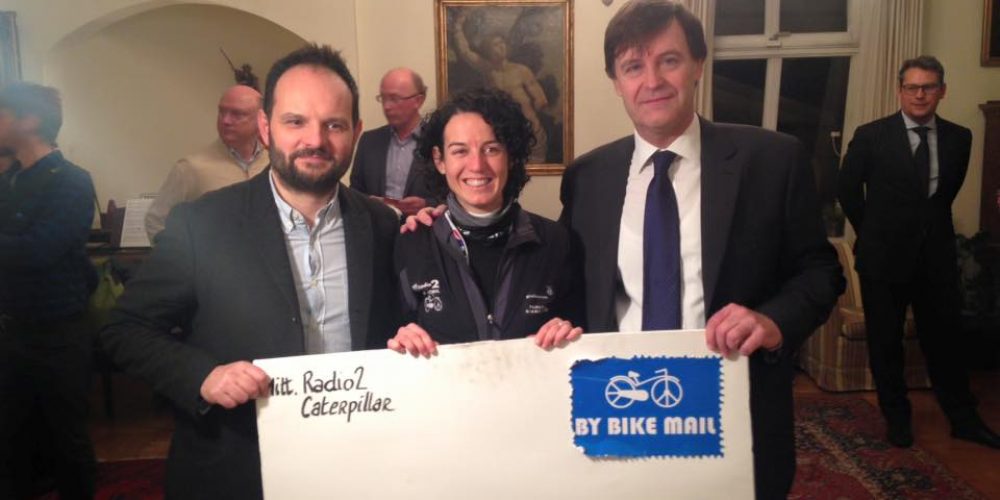 Mission accomplished for the ultracycler who left Milan riding her bike to deliver the ten thousand signatures in the Norwegian capital city to nominate the bicycle for the Nobel Peace Prize.
As expected, Paola Gianotti reached Oslo, Norway, in time to deliver the signatures collected by the radio show Caterpillar for the campaign Bike The Nobel. After more than two thousand kilometers across half of Europe in the coldest period of the year, Paola arrived at her destination radiant and full of emotions, where she found a welcoming committee composed of Norwegian bikers led by the Caterpillar envoy Paolo Labati. The procession of cyclists paraded through the city, visiting the landmarks of the Nobel: Town Hall Square, where the prize is given each year, the Nobel Peace Centre and the Nobel Institute. The signatures were delivered to Giorgio Novello, Italian Ambassador in Oslo, which will forward them to the Norwegian Nobel Committee.
The stage that led Paola Gianotti in Oslo began in Larvik, where she arrived by ferry from Denmark, and continued for 110 km, before taking another ferry to the final goal. “The temperature was mild compared to what we expected,  around -15°,” said Paola ” we found 9°, thus I was pedaling with relative ease, even if on the streets there was still a little of ice. The landscape is really wonderful. ”

“You can not imagine how happy am I after giving my support to this project,” said Paola. “The message of Bike the Nobel is really great: building a world where the bicycle brings peace, where the principles ​​of democracy, ecology and sharing are primary for everyone. It was an honor. It has been a wonderful couple of weeks, I cycled through Europe along incredible scenery, on bike paths clean and efficient, even during snowfalls. The intense cold of the early days has been mitigated by many people who have accompanied me for some stretches with their bikes, applauding me as I passed, and following the trip on radio and on social networks. It was really exciting to be the first person entering the European Parliament in Strasbourg riding a bike! It was not just a sport achievement, but also a human and social one. A special thank goes to our friends at Caterpillar, the entire editorial staff of Radio 2 and Girolibero. A great team of people, like me, excited to ride the world, from a bycicle seat or a desk it doesn’t matter, as a form of mind for a slower, but more careful, world. ”