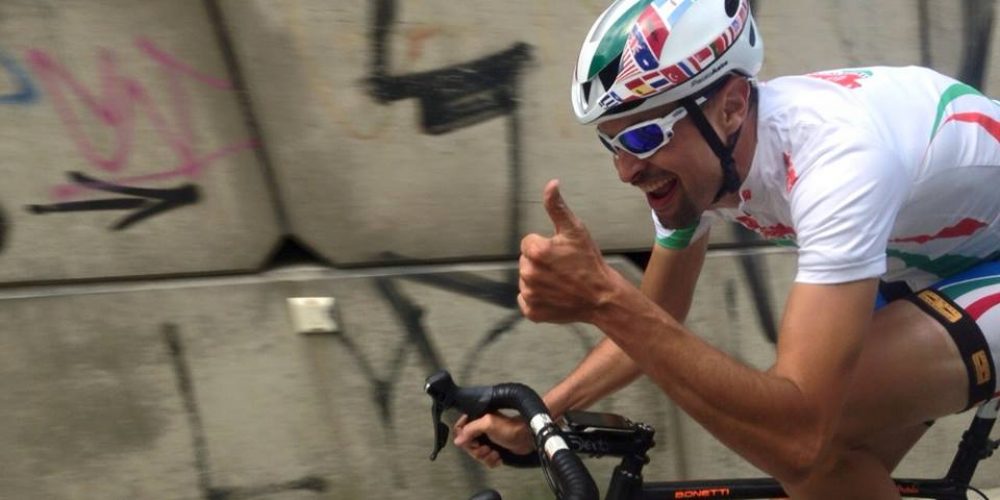 The ultracycler Paolo Aste, coming from the podium of the 12H of Monza, an all night race that was held on the F1 track Autodromo in Monza, talks about his second place and the new, extraordinary challenge that he will face together with Paola Gianotti: the Trans-Siberian, from Moscow to Vladivostok.
Paolo. How did your passion for cycling start?

I started as a child running along the streets of Valli del Pasubio, the small country wedged in the Vicenza Dolomites where I still live and work. I was about eight and I ran for three or four years, then I quit. Passion came back when I was seventeen thus I started training hard on the narrow wheels. The results arrived early. Over the last five years I discovered the passion for long-distance races. I did Radmarathon in Switzerland, 720 km in 24 hours and 30 minutes, the Dos Ras Slovenia, 1230 km in 54 hours, the tour of Ireland, 2,190 kilometers in 5 days and 1 hour. I attended the queen of ultracycling races worldwide, the RAAM, the race that crosses the United States from West to East, 4800 km in 9 days and 21 h, with 38000 vertical meters. And many others.

Tell us about the 12 H of Monza, that just ended

At Monza I went well, I finished second. In the last two hours unfortunately it started to get hot and, as I don’t have a team, I had to stop for getting food and drink thus I lost the advantage lap I had. Too bad, I was in the lead until two hours from the end. Anyway for me this race was an athletic preparation, a test for Russia, my next challenge, and it went very well. I had planned to do 450 km and instead I’ve made 509, 60 km more than expected, so I’m very happy. I reached the 41.7 average over 509 km, a very high one. I have been faster than expected.

Trans-Siberian: a hard race you will face with Paola Gianotti…

Paola Gianotti and I wanted to do something together. At the end of March we heard about this race as a first edition and we said “let’s do it”. Paola already wanted to partecipate alone but women cannot as three categories are allowed: single man, male couple and mixed couple. It is a new ultracycling race, invented by RedBull, and it follows a different formula, it’s not like in the USA where whoever arrives first has the best comforts. It includes stages from 300 to 1500 km with a maximum time, this means that you can arrive until 3 hours from the first, but if this happen you will sleep fewer, maximum 4 hours. This means that if you end a stage on late then it’s hard to recover. It will be an elimination race and there will be many temperature changes between day and night. Somewhere we will find even 30 degrees of thermal cantilever, instead of the classic 20. In fact, temperature in Russia can go from 38 degrees during the day to 7 or 8 at night. Thirty degrees are quite a lot. You have to carefully manage your effort. In a race like this you have to use your head. You can have the preparation and the organization, or anything else but for this race you should really use your brain.

What do you mean for “using your brain”. Which skills do you need?

You need to believe in what you do, in order to complete the race without problems and without wasting energy: shots are not necessary because the race lasts 21 days. It’s very long!

Moscow-Vladivostok, 9200 km and a scary thermal cantilever. How are you going to deal with it?

In order to resist nutrition and hydration are essential, you have to drink constantly. It is also important to dress or undress depending on hot or cold. In my experience, now are five years that I do this kind of competitions, you cannot take anything for granted, if you seem to be well ok, but if you seem to get hot uncover. You’re always over the limit. If there are 38 degrees and you go forward too dressed, you burn your liquids and it is impossible to integrate them back all. Then after a while you have to stop. Because you got dehydrated. Also with regard to clothing and equipment it is vital not to leave anything, taking care in particular to the bottom of the trousers and the saddle. Better to be proactive.

How is made the team that follows you?

We have three vans. There’s the Red Bull staff, and then three other people working for us: a cook, a mechanic and a video-maker. Moreover we have two guys of the organization.

Where do you sleep?

We will sleep 13 nights over 16 in hotel; for the 3 nights of the longest stages, those in areas virtually desert, we will stay in a van or tent. These 3 stages will be the hardest. For the other nights, even if we will sleep just five hours, being in a hotel will be a great comfort. In general this will be a very challenging performance with different adversities. We have to organize ourselves to guard against vibrations; it’s important, for example, to use large tires inflating them just enough. Regarding the bar, usually you put a single layer of tape but as I have bigger hands for me three are better. On the long term, this saves your wrists also helping the blood circulation. As for the bikes Paola uses a carbon Cinelli, but I prefer the titanium because it mitigates the vibrations.

What do you think about the SportPlusHealth app?

For me it’s a wonderful thing for people, because they can follow the race from home, seeing data as speed, speed average and cadence. I think it’s a great idea, continuosly improved by developers, but already more powerful than the competitors. It only needs to be known between the cyclists but it’s definitely a step forward!

How long do you know Paola?

She contacted me to have some tips before facing her world tour, then we became friends, and so we decided to do this new adventure together. I’ll see if I can keep up with her!

What do you expect from this adventure you are going to deal with?

I hope it will be a new exciting experience. And I hope in the birth of a good friendship between me and the staff, because I think it’s fantastic to share this thing with other people. Of course the final position in the race is important, but not that much. If you do your best for reaching the finish line without giving up you still won.