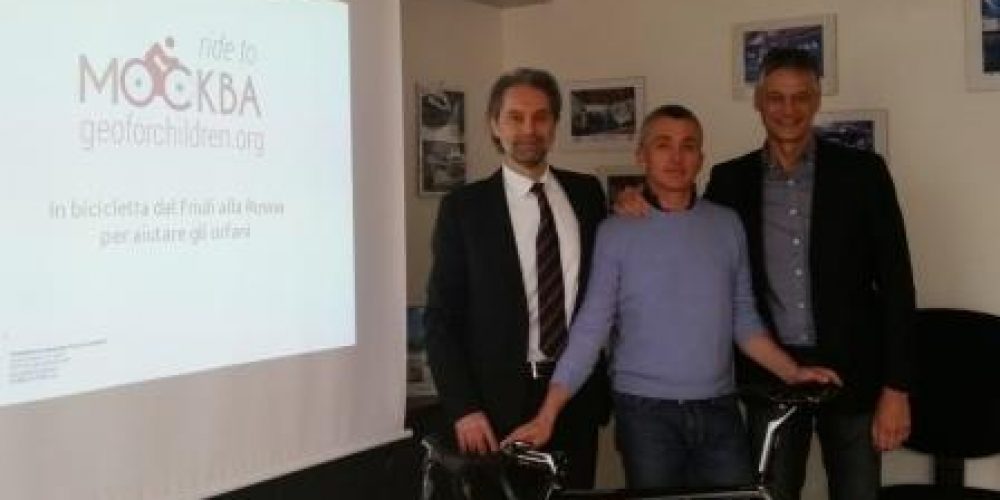 It will start on July 29th from Ronchi dei Legionari, in the province of Gorizia, and it will end in mid-August on the Red Square the solidarity initiative Ride to Moscow, organized by GEOforCHILDREN to help children without families who live in Russian institutes. 2800 kilometers on the bike, which will see as protagonists Paolo Ferraris, President of GEOforCHILDREN and creator of the initiative, the brother Alessandro and Arturo Giustina. The trio will travel for 18 days through Slovenia, Austria, Czech Republic, Poland and Belarus. To coordinate the performance, Roberto Travan, founding partner of Starbene Group together with Justina.
The project Ride to Moscow was created to promote the fund « A door for Life » in favor of Russian orphans, in order to help them at studying so that they can find a job once they leave their institute.

The fund we called « A door for Life » will be used to help Russian children between 10 and 18 years, orphans, who live within institutes until the coming of major age, because when these young people leave these centers the first serious problems appear in their lives. Data show that over 80% of them do not manage to integrate fully into society and therefore they remains on the sidelines. We want to help and assist them financially in the transition between the abandonment of the institute and life entry through studies that would later enable them to find a job in order to better integrate in our society,  » Paolo Ferraris said.

The trip includes seventeen stages between the departure and the arrival in the Russian capital city: the aim of the participants is to cover about 160 km a day and then tackle the final superstage of over 200 km. The first 100 kilometers of the exploit, up to Lukovica, Slovenia, are open to all; organizers have planned a registration fee which will be entirely donated to the fund « A door for Life », a way to involve the territory and allow cyclists and all sensible people to take care of the children in difficulty. « We are trying to organize a similar initiative during the seventeenth and final stage with our arrival on the Red Square, » stated Paolo Ferraris.

Joining Ride to Moscow is also available for companies with the possibility to « sign » a stage or sustain the journey of the three entrepreneurs. All the money raised through donations will be fully paid to the « A door for Life » initiative, as the living costs are already covered by Geoclima, the company of Ferraris. Alongside this association, in addition to the company of the President of GEOforCHILDREN, we have also Starbene Group and the communication agency Eoipso, together with Bisiachi in bici association and Ichona bike. Many companies are showing interest in the project.