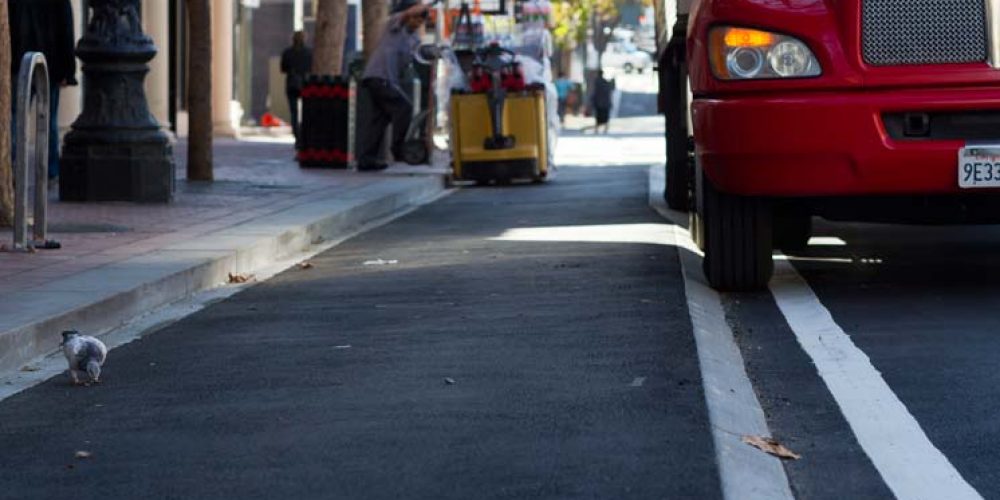 The first, on Market Street, was inaugurated last November: five centimeters separate it, elevating it, from the cars lane. With this action the council wants to counteract the “invasions” by motorists.

According to the directors of the city, the elevated cycle path grants better visibility for bikes and it should help in making safer two wheels trips. The project is inspired by some similar tracks successfully tested in the world: in Copenhagen and Amsterdam, for example, but also in Italy, where many traits of Bicipolitana in Pesaro are raised from the lanes dedicated to cars.

This type of bike path is still under trial in San Francisco: the city is testing different designs for heights and features. And cyclists who are riding there, more than 3 thousand every weekend, are invited to leave comments judging the actual security through a special online questionnaire. For 2016, the RaisedBikewayDemonstration Project involves the construction in the city of eleven other new elevated tracks.

San Francisco, in response to the increasing number of injuries and losses related to traffic, has also decided to join the Vision Zero project, which promises to clear the road deaths by 2024. Vision Zero aims to ensure the safety and the livability in the streets, protecting one million people moving each day in the city. Every year in San Francisco about 30 people are killed and more than 200 are severely injured in urban commuting. The adoption of Vision Zero is realized through the city effort of building better and safer roads, while educating the public on road safety, and enforcing traffic laws.

The Vision Zero project was born in Sweden in 1997 and since it was realized the number of pedestrian fatalities was reduced by half in the country. Based on this success, a number of cities around the world have begun to adopt the Vision Zero policy to increase security in urban centers. San Francisco is just one of many US cities to have accepted this vision of mobility. New York, Chicago, Los Angeles, Seattle, Portland, Boston, Washington DC, San Antonio, San Diego, Santa Barbara, San Mateo, Fremont, Austin, Columbia, Tampa and Bellevue are working for road safety inspired precisely by the project contents of Vision Zero.