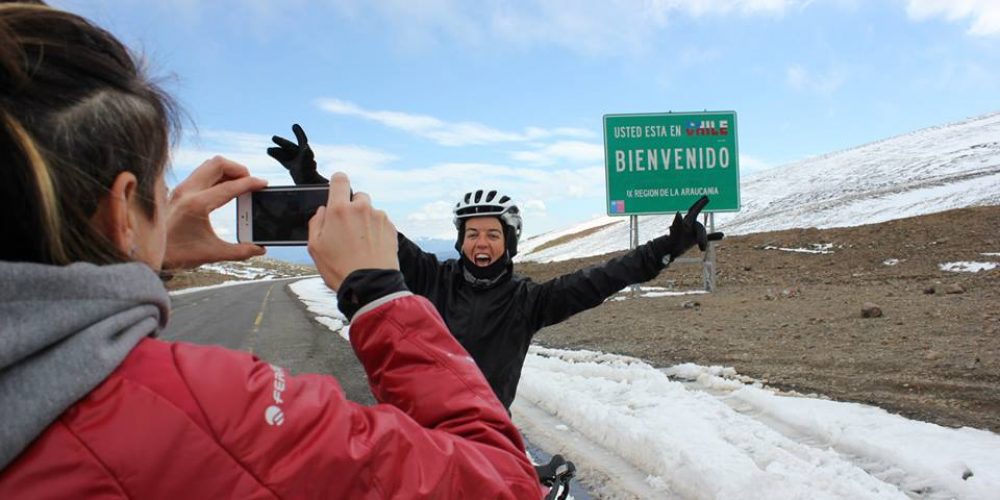 After the first part in Europe, Paola Gianotti’s world tour by bicycle carries on in South America, travelling across Argentina, Chile and Peru. Days characterized by effort, wind, cold or boiling hot, but also by colours, smiling faces, strong emotions.

The flight towards Buenos Aires lasts about twenty hours, including stopovers. After the inspection at the gate, where the officer is dumfounded by the amount of food in the luggage, Paola and the team go out of the airport and find the driver Alejandro waiting for them, with the camper which will drive them along the Latin American tour. The beloved bicycle Hobo arrived on Argentinian soil untouched. A hot night of late summer welcomes the Guinness group when they arrive, just some hours for sleeping and it is already morning. It is time to go.

“I enjoy this first Latin American ride, gaze at the new scenery around me. I immediately feel to be surrounded by a lively and carefree environment that somehow recalls home. Since the very first time in Argentina I was enchanted by the way of doing things of these people, so similar to us”.

The ride proceeds towards Patagonia, and then it moves closer to The Andes Mountains. “We’re at the border of Patagonia, the Andes are on the background. I lift the bandana to repair my face, it’s not hot at all. It is the second last day in Argentina and it seems incredible for me to be here. Soon we’ll start to go up towards the mountain post that leads to Chile”.

The vegetation thins, the first traces of snow appear, the temperature falls. Paola is going to cross the Andes. “The snow on the side of the road increases, but my altimeter tells me we are at 3000 metres of altitude, almost on the summit. I already spot at a distance the big sign marking out the border with Chile. Standing up on my pedals and without listening my heartbeat, I push my heart and breathe towards the peak.

The descent now is steep and in conjunction with a wind difficult to deal with. Chile is all ups and downs, with very demanding slopes. An alarm about an earthquake and a tsunami forces Paola to change her program: crossing the Atacama Desert, said to be the driest. Over 2000 kilometres and almost ten days on the road, here is what awaits her. Sometimes she rides even by night, in order to avoid the boiling hot. “I am pedalling under a sparkling full moon. Sometimes I raise my head to the starry sky. I get shivers. Listening to the soundtrack of Into the Wild, one of my favourite films, thoughts flash by, like the wheels of my Hobo on the tar. I am pedalling by night in the Atacama Desert. And I thank the world for being here”. The Chilean stages are all demanding due to the unremitting wind and the sudden changes of temperature, South America seems to never end. Lastly, however, the border with Peru appears. After they resolved a problem with the camper for passing, the route carries on towards Lima. By riding, they come closer to Nazca, but for now there is no time to stop and see the homonymous lines drew on the ground, considered a place of worship where the ancients communicated with deities. There is no time, they have to reach Lima and then think about the crossing towards the United States. Here is Lima. “Watch it gringos, I’m coming!”.

Now, take a look at the amazing ride through the Ande or at the last day in South America.