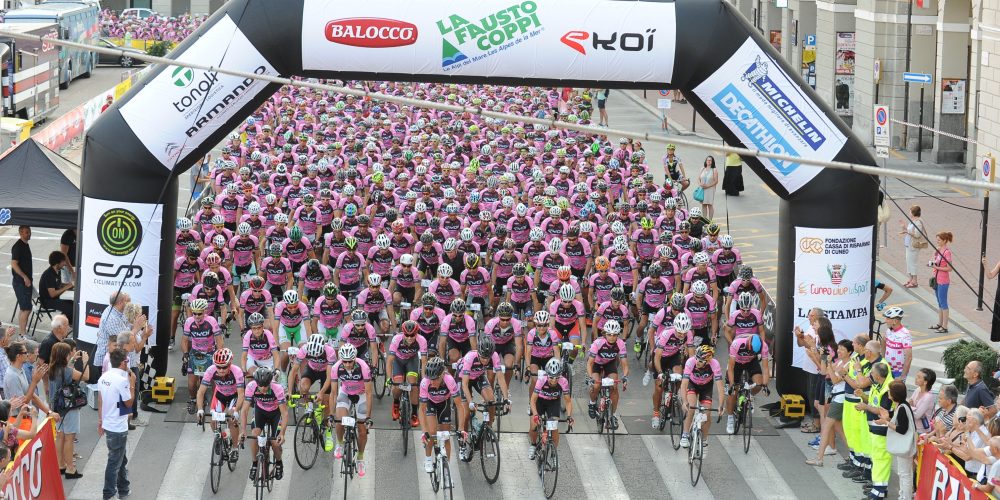 The Fausto Coppi Gran Fondo competition of this year has been called as a record edition. Attendance boom and a high percentage of foreigners. Here are data, winners and a special greeting by organizers to who left a sad emptiness in the competition.

There were 2200 enrolled people and around 2000 starter; over 30% were from foreign countries. France is placed first, Holland and Scandinavian countries follow. The arrival in Cuneo of over 6000 people was reckoned. Certainly the Le Alpi del Mare Fausto Coppi Gran Fondo 2015 competition is one of the most suggestive and demanding cycling races in Europe. It crosses Varaita, Maira, Grana, Stura and Gesso valleys, with Col Fauniera (2481m) as his highest top. Two set courses are available: a Middle Fondo, 111 km long and with a difference in altitude of 2500 m , and a Gran Fondo, 177 km long and with a distance in altitude of 4125 m.

Started at 7:00 am in a bright morning from Galimberti square, in the centre of Cuneo, the 2000 cyclists split at Soleri viaduct, 600 meters after the start. On the right for the long one, on the left for the medium one.

Starting from that moment, the five colleagues, by common consent, set up a run which allowed them to outdistance markedly the rest of the group. After holding together until Castelmagno, on the Fauniera’s climb, almost 70 km from the finish, they split. Andrea Gallo, along with Lenzi and Castelnovo, outdistanced the others.

The three of them competed closed almost until the top of Fauniera, then again Gallo goes for broke in the downhill. He manages to outdistance the opponents and makes for the finishing post solo. And he wins, arriving in Cuneo at 12:50am after over 60km solo, with an advantage of 8’06’’ on the pursuit cyclists, and after 5 hours and 50 minutes of race. Behind him, Damiano Lenzi comes, and then Paolo Castelnovo.

In the middle race the win of Davide Aufiero (Equipe Exploit) and among women the win of Erica Magnaldi (Team De Rosa Santini).

The prize-giving ceremony has been cancelled after hearing about the death of Marco Giraudo, of Cuneo. The cyclist, member of ASD Bocciofila Cuneese cycling section, was taken ill while facing the last climb -the one of Madonna del Colletto- of middle race along with a friend. In spite of the quick emergency medical service after the race and then of the 118 helicopter, resuscitation attempts were pointless.

Here is the greeting by president and vice-president of ASD Fausto Coppi On The Road:

“In sport as in life there are lovely moments, as the day of great cyclism to which we had attended today (Sunday 12th July, editor’s note) and terrible moments, like what happened today. Marco Giraudo’s death, “Giri” for his friends, shaked us deeply and not just as organizers of the event. Marco was a cyclist and a friend! We will never forget him. Today we turn our minds to his family showing deep affection: his wife Barbara, the two children Emma and Camilla, his sister. So we thought of giving them a tangible sign of our affection, which of course will not succeed in making up for “Giri” absence, but will surely help in these tough moments. We opened an account with fund-raising purpose in favour of Marco’s family. The account is at BRE Bank (in the name of ASD Fausto Coppi on the road) – IBAN IT98B0690610200000000028497 – reason for payment “Raccolta fondi PRO GIRI”. We thank with all our heart the many friends and cyclists who have already made a contribution and all those who will do that again. “