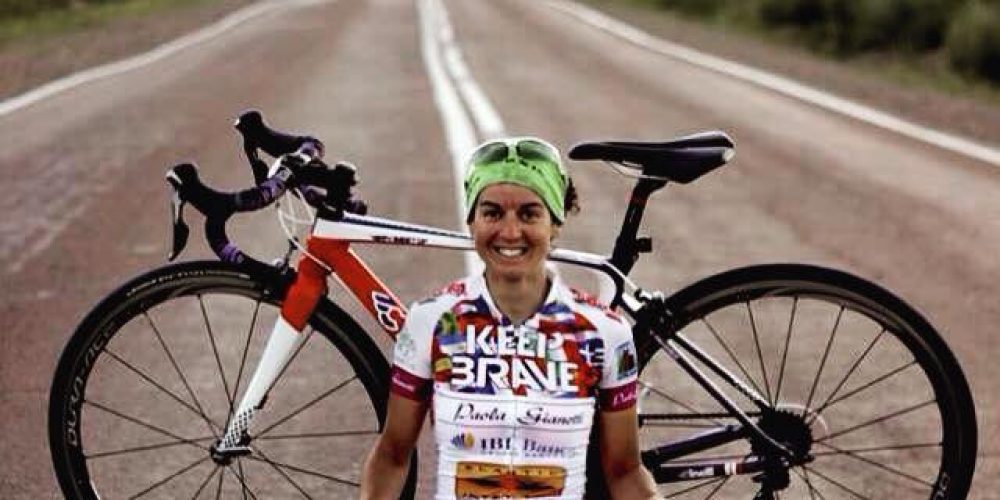 How is it, doing the world tour by bicycle? How much commitment, how much effort is required? Which are your feelings? All the answers are in the pages of “Sognando l’infinito”, the book written by Paola Gianotti, who talks about the world record which made her gain the Guinness World Record in 2014.

We decided to chronicle, pedal by pedal, her routes and her entire adventure by dividing it into stages: departure, continent after continent, arrival. There was no lack of difficulties and twists, but Paola has always shown willingness to realise her dream. Paola’s motivation and her fans’ affection were central, but we like thinking Sport  Plus Health also played its part in reaching this significant victory by supporting her activity. A woman, a dream, a bicycle, the world, 29430 kilometres, 144 days.

See all the stages on our website: try to analyze the first, from Ivrea to Bergeggi or the last before the flight to Buenos Aires.

Today we tell you about the departure.

8th March 2014. “A no coincidence date. I do not consider myself a feminist, but I am the second woman in the world who attempts this undertaking. By starting off today it seems to me to honour at best the International Women’s Day”. Unfortunately, after preparing for months, the day before the departure, the driver of the camper throws in the towel. “After all these months, the one to back down is the only man in the team”. I was dismayed, but then we decided to start anyway with a female team: Ivana, beloved friend, and Raffa, video maker and now also driver of the camper.

“Hobo (the bicycle, editor’s note) awaits me downstairs. A neat little number. It is ready to face 29000 kilometres around the world. I do not have excuses anymore, I have to go out. I want to pedal until I have the strength, in an attempt to break a world record but also to pass on a message to whoever is willing to listen: if you have a dream, you can make it true, whatever it is”.

Departure from Ottinetti square, Ivrea. Crammed with people wishing goodbye, cheering. The camper is in the middle of the square, under two big arches which mark out the start. Pink balloons everywhere. A banner with the words “Come on Paola! We are with you!”. Bunches of flower, many children with their bicycles. The friends, the family. They are all there for her, the girl from Ivrea, who loves travels and sport, the one who chose to change her life in order to follow up her personal inclinations and to be faithful to her dreams. It is 11 a.m., time to go. “I retrieve Hobo and put myself before a hundred cyclers, there to come along with me for some kilometres in my first stage. A last wave of clapping, goodbyes and pink balloons. My world tour is about to start, but I will never forget this moment, this packed square. I murmur a thanks”.

The direction is towards Viverone Lake, a well-known road. Little by little, the small groups of cyclers detach themselves, until when Paola remains on the saddle alone. The first length of Europe started and is going to last 16 days. She is going to pedal along the French Riviera, to travel across the wild Camargue, then Barcelona and Valencia by night. Once she goes past the Portuguese border, the first European length is practically over. “At least during this part of the travel, I guess we found someone able to read the two signs hanging in the back of the camper – TENTATIVO RECORD DEL MONDO IN CORSO (Attempt of world record in progress) and ATTENZIONE CICLISTA (Mind the cycler)-, haven’t we?

In Lisbon, her parents and her partner Davide await Paola, they came to say her goodbye before the flight overseas. At that point, she has already made her first 2800 kilometres of the world tour. In the evening, a dinner all together in a Italian-Portuguese restaurant, the menu suggests an excellent bacalao. The owner of the place becomes curious and asks what kind of undertaking Poala is carrying on. “I am always surprised by the astonishment which follows people’s disbelief, when I tell them I am doing the world tour by bicycle. First, they smile, as it was a joke, then, when they find out it is not, they fire questions and compliment me. Every time I realise I planned and undertake something really special. And every time I get some encouragement from their enthusiasm”.

Hobo is wrapped up properly, ready to get to Buenos Aires, in Argentina. The cases are ready, they are a lot: technical clothing, first aid for bicycle, food (never saw an Italian leaving without), bag for medications, plus all the electric equipment. Lastly, personal luggage. However, this is the world tour, the one waiting for Paola and her team. There are moments, like this one, when the fear gets the upper hand. “I am afraid but I want to beat it. Two feelings which can live together, and in fact I often have to bear them both. I am learning to handle them. However, sometimes I just let them to take their space, and let them run in my heart and body”.

The plane is ready to leave, full of all the dreams of every person in there. There is also Paola’s dream, a special one, a shared dream. Now the fear is left behind, making way for the euphoria. “In the end this world is not that big. And the distance is above all a state of mind”. Appointment in Buenos Aires.