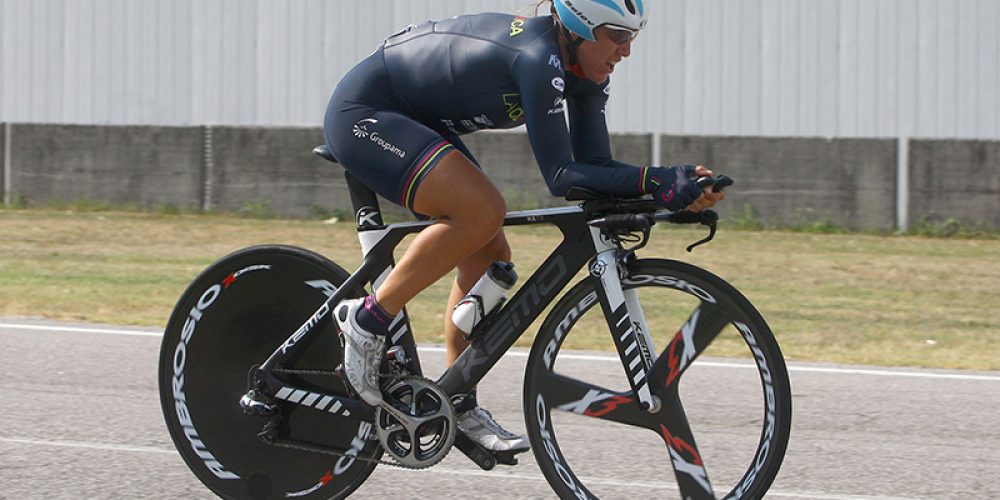 Silvia Valsecchi, Tereza Medvedova and Lenore Pipes,members of BePink LaClassica are going to attend to the 2015 edition of road ricing world championship. The three athletes, chosen for Italian selection, are going to fly to Richmond, in the USA. They are going to bring with them our App SPH Cycling, technical sponsor of the team, which will support them in their performances.

Silvia Valsecchi, from Lecco, year 1982, has always been fond of bicycle (she cycles from the age of 7). She is going to wear the Italian national team uniform in the individual time trial of 30 kilometres which will take place on 22nd September; she is also one of the pre-called by the team manager Edoardo Salvoldi for the line trial. In 2015 Silvia Valsecchi was crowned Italian champion in the time trial for the second time in her carrier. She also won the Offida Stopwatch Competition and gained the fourth place at the Tour de Bretagne Féminin.

The Slovakian Tereza Medvedova, year 1996, has already attended to the world championship  appointment in the junior league. She is going to try her hand among the élite at the line trial on 26th September. She is national champion in the time trial. And always at the Slovakian national championship she gained the second place in the line trial. Among other 2015 scores, the fifteenth place in the prologue of International Women Tuscany Tour, the twelfth place in the second stage of the Tour of Zhoushan Island, the twentieth place (line trial) and the twenty-first (time trial) at the European Championship U23. Bicycles are her passion and she loves cycling to the rhythm of music.

At the start of this last 129,6 kilometres dedicated to Élite Women there also will be Lenore Pipes, year 1985. The athlete, with some Asian features, is from Guam, a remote island in the Pacific, the biggest and southern in the Mariana archipelago, under USA protectorate. Besides cycling, Pipes studies. She lives in the USA, in Ithaca (NY) and she is a member of the BePink team for just one month. In 2015 she has been ranked fourteenth at the Madrid Challenge by La Vuelta, twelfth in the first stage of the Tour de l’Ardèche and in the second and third stages of the Trophée d’Or Féminin (competitions ran with BePink LaClassica). Among the scores, she was right on the seventh place target at the Delta Road Race (Canada), the eighth at the GP de Gatineau (Canada) and the fourth in the third stage at the Joe Martin Stage Race (USA). This is her second attendance to a world championship, after Valkenburg 2012 and she dreams about going to the Olympic Games.

“Having the chance to wear the Italian national team uniform has always been a great honour,” Silvia Valsecchi commented, before flying overseas. “When I was informed that I was among the called ones for the Italian selection it was an incredible feeling; a joy beyond description. At the World Championship the competition will be very high, of course, but we will do our best in order to be a credit to the Italian flag”.