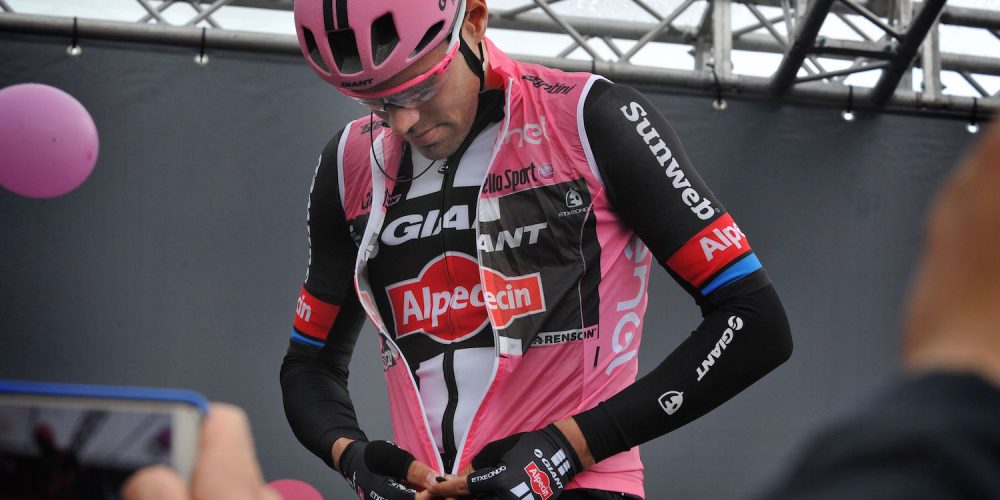 TEAM GIANT-ALPECIN AND TOM DUMOULIN HELD ONTO THE PINK JERSEY AND EXTENDED THEIR LEAD IN THE GENERAL CLASSIFICATION AT THE GIRO D’ITALIA FOLLOWING STAGE 6 AS THE BREAKAWAY PREVAILED IN ROCCARASO.

The day got off to a fast start as the riders headed out of Ponte on the 157km route to Roccaraso and it wasn’t long before a break of three slipped up the road. Dumoulin was kept safe throughout the short but mountainous stage, and the Dutchman stayed calm as his teammates controlled the pace in the tricky weather conditions.

The stage was always likely to be decided on the uphill finish. The challenging climb, which is 17km long and averages a gradient 4.8 percent in gradient, was always going to be the decisive factor and as the peloton closed in on the breakaway Tim Wellens (Lotto-Soudal) attacked from the front group at the foot of the climb. Wellens managed to stay clear and he soloed to an impressive victory.

Meanwhile, the main bunch had been reduced to around 20 riders. Tom Dumoulin was well positioned at the front of the peloton with the support of Georg Preidler and Tobias Ludvigsson. With 2km to go, Dumoulin saw an opportunity and attacked. It was a fantastic ride by him and he raced to 4th place. In the general classification, he extended his lead to 26″.

Tom Dumoulin said: “I felt actually quite good today much better than I expected. Especially on the last climb, I had some good legs. I coached Tobias and Georg to set the pace up the first part of the ascent and then the other teams took over. When Nibali attacked and Sky brought him back I saw an opportunity to attack and I went for it. I just trusted my instinct on that moment.

“I could understand that the other guys didn’t want to cooperate with me in the chasing group and I would have done the same. In the end, it cost me a little bit of time, but overall it was a good day. It is a bit unexpected to extend my lead, but I am very happy with the performance.”

“I always said that I hadn’t prepared for the high mountains and for the overall classification but I surprised myself today, I didn’t think I would be this good. Of course, when I did my preparations for the Giro I worked hard, but only at home, without any altitude training. I didn’t think it would be good enough but apparently it has been until now. We have to see how long it last.”

“Concerning the time trial on Sunday, it will be very difficult I think to get enough time in Chianti to defend all the way to Turin. I’ll go full gas like I always do and we’ll see. Anyway, I don’t have the pressure to ride on the podium until Turin. I’m just here to enjoy myself. As long as I have the jersey, I’ll try to defend it and also take opportunities to take time.”

Coach Marc Reef gave his thoughts after the race: “It was a really tough day. We did a good job with the team at the beginning to control the race. Then Movistar Team did a very fast descent and the whole bunch split. When the race came back together, we set the pace at the front of the peloton once there was the breakaway of five guys. Eventually, as the gap quickly increased other teams joined the chase.”

“On the uphill finish, we still had four guys to support Tom and to do the chase. Of course, we were expecting attacks but we stayed calm in the bunch. Georg and Tobias did a great job in setting the tempo. In the last kilometers, Tom saw an opportunity and attacked from the GC group. I didn’t expect it but Tom was very strong and he achieved a great result as we retained the pink jersey.”