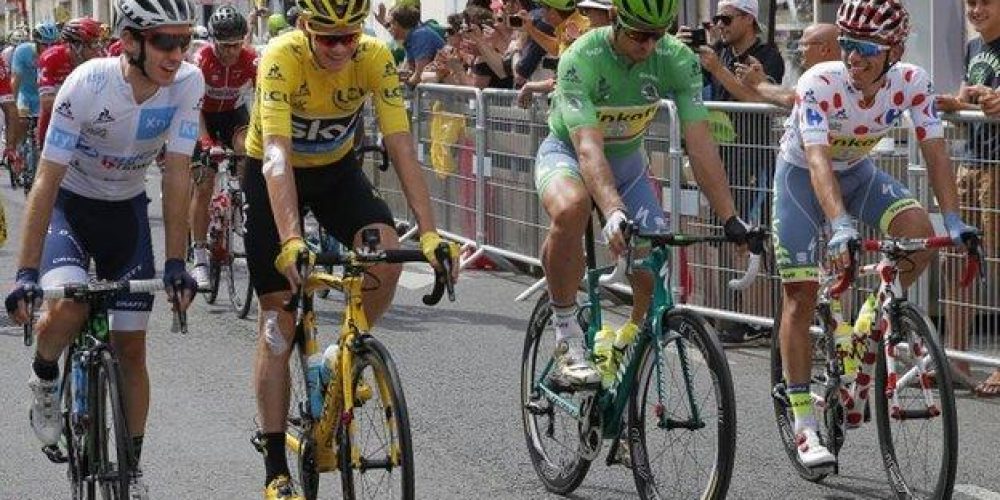 Chris Froome became Britain’s first three-time winner of the Tour de France when he crossed the finish line of the 21-stage race in Paris on Sunday.

He finished arm-in-arm with his team-mates behind the peloton after Andre Greipel won the final sprint finish.

“It’s an absolutely amazing feeling. It feels like a privilege to be in this position. I’ve always had my team-mates around me.”

How Froome won the Tour

He had built up a lead of more than four minutes over the previous 20 stages and tradition dictates that the yellow jersey is not attacked on the final stage.

Sunday’s stage to Paris began with a processional ride from Chantilly, in northern France, with the winners of the four main jerseys leading the peloton.

Froome, in the yellow jersey, was joined by Yates in the white jersey as best young rider, Slovak Peter Sagan in the green points top and Poland’s Rafal Majka in the polka dot king of the mountains jersey.

When the riders reached Paris the race became competitive for nine 6.8km laps of the city centre which culminated in a bunch sprint on the Champs-Elysees, which Greipel won for the second time in his career.

With disgraced Lance Armstrong’s seven ‘wins’ between 1999-2005 expunged from the record books after he admitted to doping, the record of five Tour wins, held jointly by Frenchmen Jacques Anquetil and Bernard Hinault, Belgium’s Eddy Merckz and Miguel Indurain of Spain, is very much in Froome’s sight.

Indurain was the last man to successfully defend the title, winning five successive Tours from 1991.

“It would be my dream to keep coming back for the next five or six years and give myself the best opportunity of winning again,” said Froome.

“I can’t say the novelty is wearing off. It’s such an incredible event and to be in the yellow jersey is every cyclist’s dream and the biggest honour in our sport.

“I hope I can be back next year to fight for it again.”

A moving tribute to the victims of Nice

Froome used his podium speech to reflect on the attack in Nice that killed more than 80 people on Bastille Day.

“This Tour has obviously taken place against the backdrop of terrible events in Nice and we pay tribute to those who have lost their lives,” he said.

“These events put sport into perspective but it also shows the value of sport to free society.”

And he also took the opportunity to thanks his wife, Michelle, and dedicated the victory to his seven-month-old son Kellan.

He took the race lead after an unexpected attack on the descent into the finish at Bagneres de Luchon on stage eight and extended his lead with a similarly surprising attack in crosswinds with Sagan on stage 11.

However, his good work was nearly undone on the Bastille Day ascent of Mont Ventoux when he crashed into the back of rival Richie Porte, who had collided with a motorbike. With his own bike unusable and a replacement on his team car several minutes away, the race leader began running up the mountain before taking a bike from a neutral support car.

After holding off the challenge of Quintana and surprise challengers Bauke Mollema and Yates in the Swiss Alps on stage 17, Froome won the second individual time trial to build a commanding lead of almost four minutes.

Despite crashing on a treacherous descent on stage 19 and borrowing team-mate Geraint Thomas’ bike to ride the final 12km to the finish, Froome managed to extend his overall lead and then defend it on the final stormy day in the Alps, setting up the processional ride in to Paris.

What happened to his expected rivals?

Movistar rider Quintana was expected to be Froome’s main challenger but the Colombian’s attacks in the mountains failed to materialise and he said he had been “suffering with allergies” during the race.

Two-time Tour winner Alberto Contador, who had targeted his entire season around this race, crashed on the opening two stages and eventually abandoned on stage nine after falling ill.

Vincenzo Nibali, Tour winner in 2014 and victor in this year’s Giro d’Italia, was playing support to his fellow Italian Fabio Aru but the Astana rider was unable to keep pace in the mountains and lost further time in the two individual time trials.

Who won the other jerseys?

World champion Sagan continued his domination of the points classification, which rewards consistently high finishes on each stage.

The Slovak won three stages, had five top-five finishes and won six intermediate sprints to win a fifth green jersey and is now just one behind Germany’s Erik Zabel, who won a record six from 1996.

Majka, who is a Tinkoff team-mate of Sagan, won the polka dot king of the mountains jersey for a second time, beating Thomas de Gendt by 79 points.