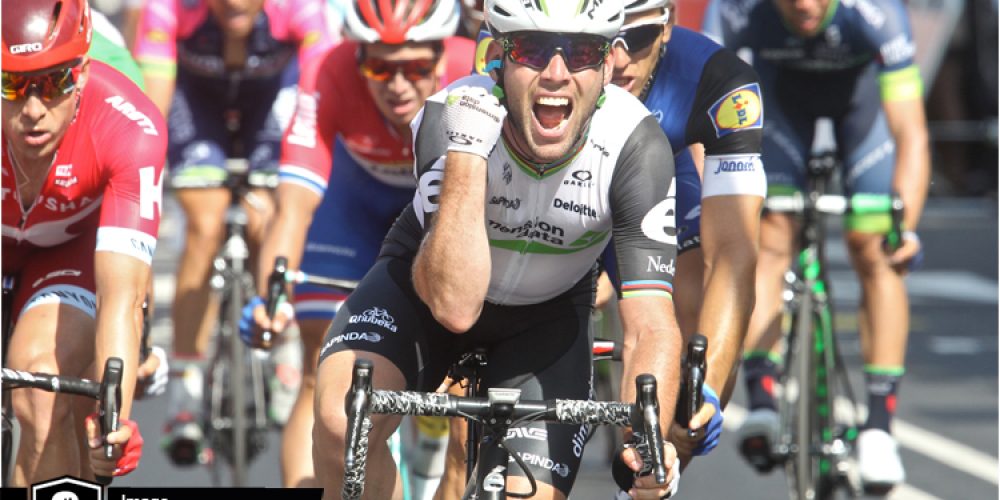 The fairy tale Tour de France continued on stage 6 for Team Dimension Data for Qhubeka as Mark Cavendish sprinted to his 3rd victory at this year’s race.Marcel Kittel (Etixx-Quickstep) was 2nd in the lunge for the line and Dan Mclay (Fortuneo-Vital Concept) placed 3rd.

At 190km from Arpajon-sur-Cere to Montauban, the terrain took in a few undulations but nothing significant enough to stop a big bunch sprint from deciding the final stage outcome. Only 2 riders made the early break of the day and this all but assured that the sprinters would have their day, as Team Dimension Data for Qhubeka, Etixx-Quickstep and Lotto-Soudal had no trouble at keeping the escapees at around 3 minutes for the majority of the day.

The inevitable catch took place just inside of 15km to go, and this is where things would get really interesting. The road was rather narrow and it meant that the peloton was densely packed, with almost no room for teams to move up. Team Dimension Data for Qhubeka were in the front 3rd of the peloton but there just didn’t seem to be a way through for our leadout team to get to the front.

The narrow road continued right up until 3km to go and it was clear that a long leadout train was not going to work today. Cavendish just wanted to be taken to the wheel of Kittel, from where he would then freelance to the finish. Our African Team were able to get Cavendish locked on to the German’s wheel after some clever work by Mark Renshaw, and from there our Manxman showed his class. Jumping with around 300m to go, Cavendish came from behind Kittel to forge ahead on the slightly downhill sprint and took another incredible win for Team Dimension Data for Qhubeka.

While the entire team were working toward the common goal of delivering Cavendish to the finale, Daniel Teklehaimanot, played a huge part in today’s victory as the Eritrean national champion spent close on 150km working at the front of the peloton. This victory comes at the perfect time for our African Team as we begin the big push to get people to sign up for our Qhubeka5000.org challenge. Tomorrow the race will head into the Pyrenees and Mark Cavendish will do so as the leader of the Green Jersey points competition once again.

Mark Cavendish:
It was a hot day. Daniel Teklehaimanot did an incredible job to control the breakaway. He was riding super strong actually and he was up there for a long, long time. The guys are getting more and more confident as the race goes on. Steve Cummings was up there fighting with us until the end which was phenomenal, he is a strong guy to keep us there in the final. There were essentially two finish lines, one was at 12km to go and one was at the finish. We were a little bit too far back at the first one but Mark Renshaw did a great job at 4km to go to get me just there and out of a sticky situation. I thought the best wheel to follow in the final was Kittel. It was a fast finish and with the finish line not appearing until late I knew the guys would leave it late because your instincts are not to go before you see the line. I knew Kittel’s wheel was the one to get the biggest slingshot from and with the speed of the finish, I knew if I got a good slingshot I could be going 3-4km/h faster than him before he had time to react so that’s what I did and I was happy to hang on for the win.