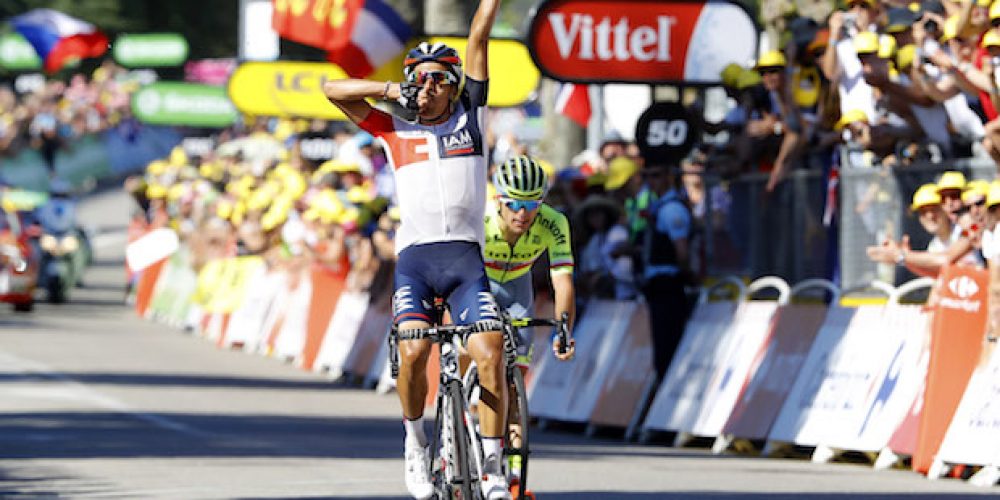 Accomplished by Jarlinson Pantano, who at 27 years old, has had the luxury of winning a stage in his second participation in the Tour de France, and gives Michel Thétaz, founder of the IAM Cycling team, an extremely prestigious victory.

From Jarlinson Pantano: “I have a lot of respect for Majka, but I was ready to realize my dream.”

According to Rik Verbrugghe. “When Majka was 20 seconds ahead, I told Pantano over the radio, “Pais…for Colombia!”

Again, given by Jarlinson Pantano: “On the final descent, I just let myself go, and I was able to bridge back up to Majka. Then I just remained calm, even into the last kilometer. I had good legs. I was not too worried when Majka launched his sprint; I dove into his slipstream without any trouble. I was even able to lift my arms some meters from the line, and really savor this success. Even now, I am in the clouds.”

Yet again from Pantano: “I have to thank my team, my teammates, the staff and the sports manager who believed in me ever since last year, and told me that I have the qualities needed to win big races.”

As given by Rik Verbrugghe. “This is a completely happy moment because we really did everything we could to win this stage. We have from the start of the Tour de France been in the breakaways because we knew there was basically no other way we would have a chance to win a stage. I am really happy for Jarlinson, but also for the entire team because we deserve it.”

Michel Thétaz’s. Present in the team car along with Rik Verbrugghe and Kjell Carlström, following the man of the day, the founder of the IAM Cycling team spoke from the heart when congratulating his team. “All victories this season have been very emotional for me, but this one has to be the peak. It gives me chills, and we are so happy for all the guys. They worked very hard and we are all thrilled. We dreamed of having success at the Tour de France for nearly three years. The first two attempts we have to leave empty handed. So this year we really put everything together that we possibly could in order to reach our goal. This is the culmination of a dream come true.”

11,000. In Euros, this is the amount of money that Jarlinson Pantano received after his victory in the 15th stage of the 2016 Tour de France.

THE MENU FOR THE DAY

The stage will finish in Bern after racing 209 kilometers from Moirans-en-Montagne, a town in the French Jura. First the peloton will have to travel through the French department of Doubs before crossing the Swiss canton of Neuchâtel from Verrières ahead of arriving in the Swiss capital, where a selective final can be expected.