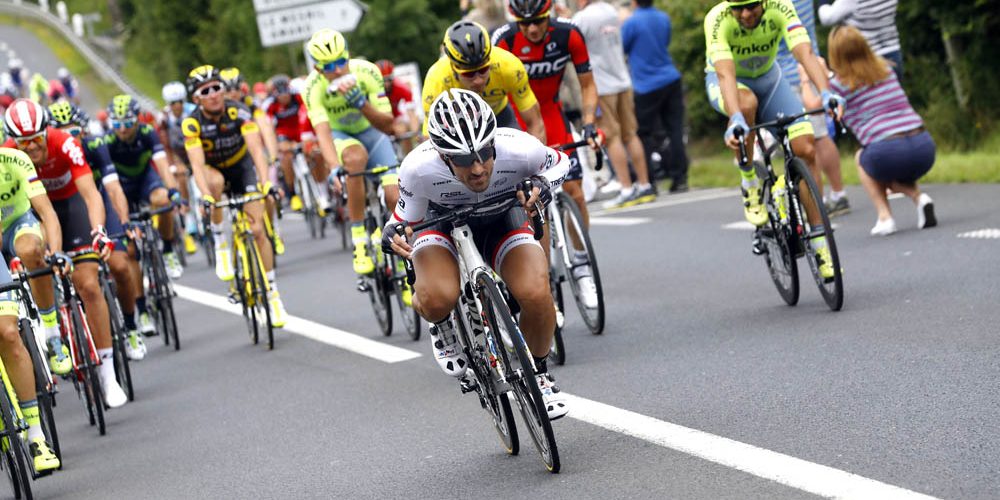 It may be his first Tour de France, and he may be battling the world’s best in some of the largest bloodthirsty fights to the line, but Edward Theuns is showing an experience that belies his youth in the tumultuous and dangerous world that is bunch sprinting, adding another 5th place in stage three Monday.

“I am happy; again I am in the same line as the big sprinters, “said Theuns. “It shows that the first stage is not just a coincidence, of just one time that I happened to get there. The team did a great job for me again. In the last corner, I lost a bit of speed because they were coming from the outside and I had to brake a little. But 5th again is really good for me, I think.”

It was a quiet ride for most of the 223-kilometer stage three with one lone rider out front to control. Even when Thomas Voeckler (Direct Energie), perhaps bored with the leisurely pace, joined the lonely soul in the final 80 kilometers, no alarms sounded behind, the peloton continued plodding along in cruise control.

“It was the slowest race I ever did I think!” agreed Theuns. “There was one guy in the breakaway, so it was really, really, really easy today until the last 50-60 kilometers. It was like a half-recovery day today.”

With the scent of the finish drawing near the tranquility broke, the race was on. The sprinters’ teams began the fight for positioning for the stage win and the GC contenders to stay up front and out of trouble. The bedlam began.

At just under three kilometers remaining, Fabian Cancellara powered to the front with Theuns on his wheel, incredibly heading the peloton for the next kilometer and keeping Theuns in the top positions.

“Fabian gave me a pinch in the butt with around 3kms to go to take his wheel,” explained Theuns. “He brought me from like 60th position to the first of the bunch. It was a big effort from him, and then he kept going so I could stay out of the wind.”

Cancellara added: “In the front, it is the most easiest because you are out of the danger, but the most hardest because you are pulling at 60-70km/h to keep everyone in line. You do the maximum you can, and when you are done with everything you had, you just pull back and try to stay on the left or right to not cause trouble for the others.”

Theuns was left to his own devices for the last 1500 meters, like a pistol battling in the trenches amongst heavy artillery, and even when swarmed in the final corner, he would not back down.

Theuns: “The last 1.5kms was not like I thought it would be, it was a little downhill, so riders were coming from different sides, which made it hard to get into good position for the last corner. When I had to brake there, and lost a little speed, in this kind of finish that little bit of speed is important because it’s hard to get it back in the uphill. Then it’s hard to compete with the best sprinters in the world.

“But they are not really sprinting away from me. It’s all in the details. If I can get a little bit closer to start the sprint, then… Small things can make a difference. The most important is that again I showed I am fast, that I can be there in the finale, and I think that for me and for the team this is something we can build on.”

Tomorrow’s stage four offers another chance for the motivated and hungry Theuns, who would like nothing more than to capitalize on the strong team showing so far.

“Tomorrow we will try again. I hope that we will be rewarded for the way we are racing: the spirit is good in the team, we stay together, and in the end, we try and come to the front as a team. It would be nice to show something for this.”

Jasper Stuyven had no stress in maintaining his lead in the mountains classification, and will continue in the polka-dot jersey for another day.

“It was an easy day, it was nice to recover from yesterday,” said Stuyven. “I wish that I could have helped Edward more, he has a really good sprint, but I just couldn’t push today. Tomorrow I think I should be fully recovered from my effort.

“Today the disappointment of yesterday was gone. I am happy with what I achieved; I am proud to wear the jersey.”