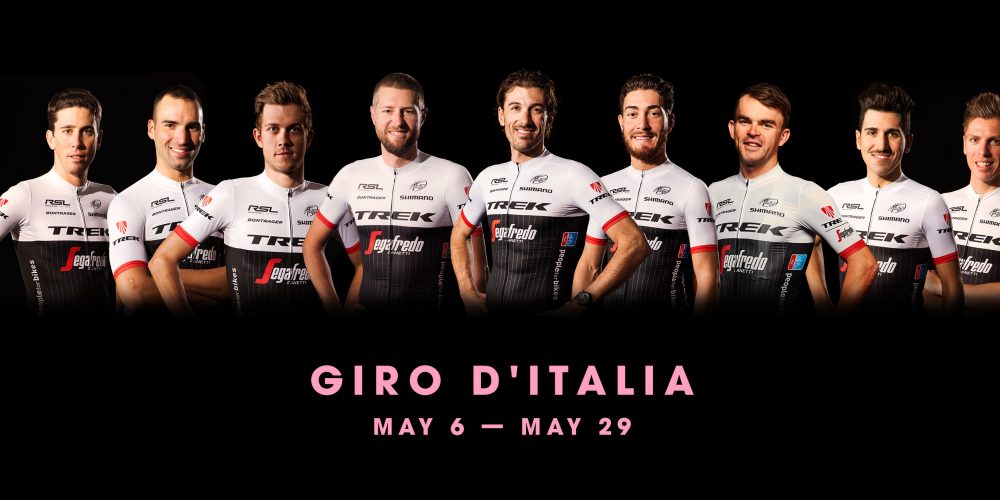 The 99th edition of the Giro d’Italia kicks off in Apeldoorn, Netherlands on May 6th and Trek-Segafredo has organized a strong nine-man squad that will vie for top results in the season’s first grand tour.

They will be joined by Boy Van Poppel, Eugenio Alafaci, Marco Coledan, Jack Bobridge – all strong rouleurs who will work for the sprints and in the flatter parts of stages – and climbers Laurent Didier and Riccardo Zoidl, who will offer supporting roles in the climbs.

Fabian Cancellara, who normally eschews the Giro after a draining Classics campaign, is taking the start in his first Giro d’Italia since 2009. Cancellara will set his sight on the prologue, with the hope to take home the coveted maglia rosa – the only grand tour leader’s jersey missing from his palmares.

Team director Adriano Baffi said this about the line-up for Giro: “We are coming to the Giro with big goals, but goals that we believe we have a very good chance of achieving. Our early target is to go for a stage victory with Fabian and Giacomo. Giacomo deserves a victory, he has been second enough times, and Fabian will try and win the first stage prologue and the dream to take home his first ever maglia rosa.”

“We have opportunities in the stage nine time trial with Fabian and also Jack (Bobridge), the numerous sprint stages, and will fight to win the points jersey again. Of course, Ryder is aiming for the overall, and we strongly believe he can attain a top five and perhaps the podium if all goes well. We have a very strong team assembled and it will be a very exciting three weeks for us.”