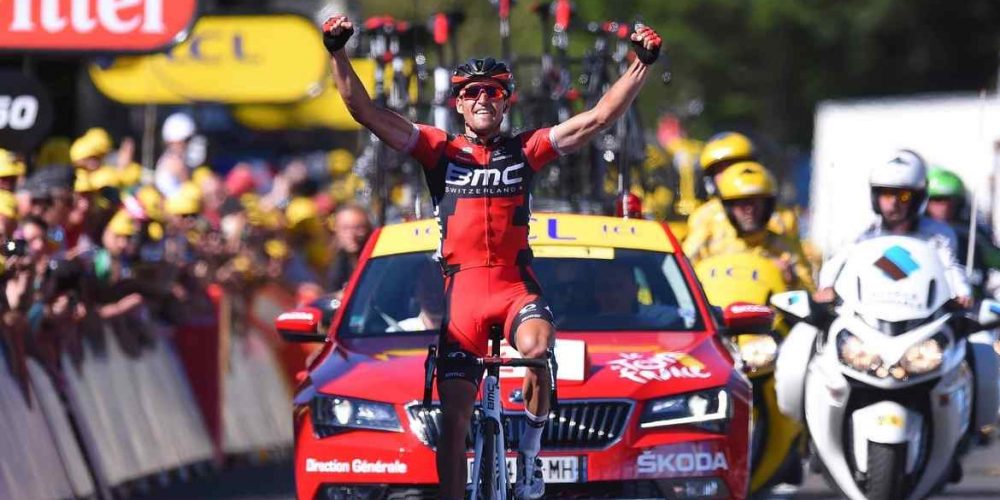 It was a dream come true for Greg Van Avermaet who put in a stunning solo effort that saw him win stage 5 and take the leader’s Yellow Jersey at the Tour de France.

Van Avermaet’s incredible performance sees him with a strong lead in the General Classification, 5’11” in front of Julian Alaphilippe (Etixx-Quick Step), and 5’13” in front of Alejandro Valverde (Movistar Team).

An early breakaway of nine riders including Van Avermaet formed and established a solid lead of over ten minutes in the first 100 kilometers. Van Avermaet attacked from the breakaway with Thomas De Gendt and Andrei Grivko with 120 kilometers to go.

Grivko was dropped as they approached the final four climbs, leaving Van Avermaet and De Gendt to battle it out for the victory.

Van Avermaet attacked again with 17.5 kilometers to go and powered on to solo to the second Tour de France stage win of his career and first time he has worn the Yellow Jersey.

Greg Van Avermaet: “It feels great. I was never dreaming about the Yellow Jersey but it is a big dream that has come true. I was happy with the stage win last year, but now another stage win and the Yellow Jersey, I think it’s once in a lifetime for me and I’m going to enjoy it as much as possible tomorrow.”

“I felt pretty good. Grivko was not working at the beginning, Majka was not working, so me and Thomas De Gendt did a really good job. We were the strongest guys from the break I think, and we made the race hard and we saw that the peloton wouldn’t come back on this steep climb. I felt pretty good and I just went on my own because I was strong enough to hold it to the line.”

“I think for my type of rider it’s really hard to get the Yellow Jersey and I’m so happy that I have it. The stage win is something but wearing yellow is the most beautiful thing I think for a cyclist.”

Yvon Ledanois: “It was always the plan to put Greg in the breakaway today. We knew it was a stage for the breakaway but it wasn’t easy and as well as Greg we also had Amael Moinard and Michael Schar who were looking out for it. It was a fast, hard stage. When we saw the nine riders who had made it we knew it was a good, strong breakaway. The gap got out to well over ten minutes. I’m happy for Greg, I’m happy for the team, I’m happy for BMC Switzerland, and I’m happy for Andy Rihs. It’s always important to take the Yellow Jersey, especially for the sponsors. Not many teams get the chance to wear the Yellow Jersey or win a stage, and to do both in the same day is really special. It’s a good day for BMC Racing Team.”

Richie Porte: “I was comfortable. Tejay and I have shown that we can work together and Damiano Caruso worked well and put us in a really good position. I knew that those descents were going to be crucial. At the end of the day, it’s a great day for the team. It’s not nice to have lost time like that [flat tire on stage 2] but you know, you just keep fighting each day I suppose. The signs are good, I had good legs and it’s quite exciting.”

Tejay van Garderen: “Greg certainly looked like he had good form today. It was a super impressive ride and great for the team, and great for Greg as well with the season he’s had, so he really deserves it. Tomorrow I’m sure we’ll help to control the breakaway but I don’t even expect us to have to do much work to bring them in because the sprinters’ teams will probably want to pull back the breakaway. I think we’ll just enjoy the day in yellow, stay relaxed and get ready for the Pyrenees.”