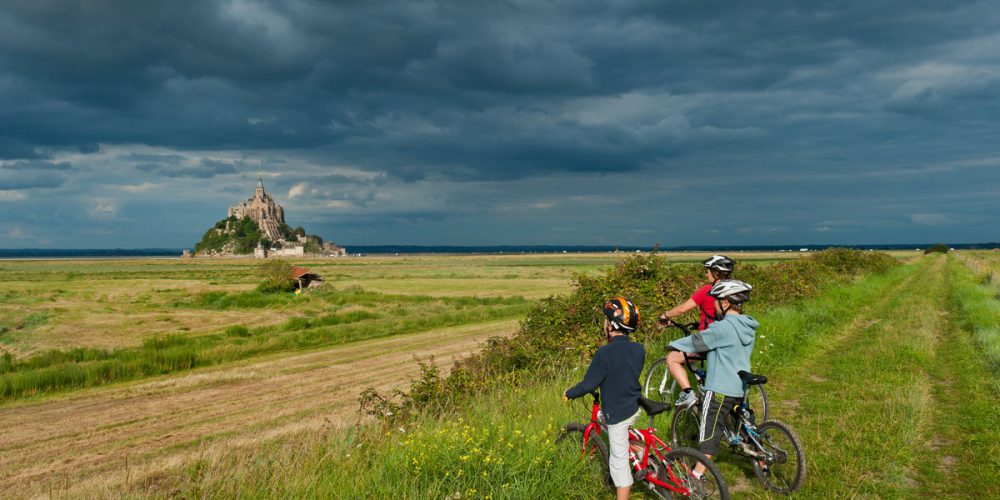 Four hundred and fifty kilometres from Ville Lumière to the shores in front of the Channel, through a breathtaking scenery, leading to one of the most suggestive location in France: the island of Mont Saint-Michel, along with its ancient abbey on the steep rock. It is the cycle tourist tour “Véloscénie”, a very well-organized bicycle lane, affordable for all. It is manly flat, with some short climbs. It expands predominantly on green roads on which just pedestrians and not-motorized vehicles are allowed to circulate, and not much-travelled country roads. It is a bicycle lane which keeps changing, bound to widen for the years to come. It includes seven main sections with different difficulty levels.

The route starts from the centre of Paris, next to Notre Dame de Paris. It travels over a green road where you can pedal comfortably; you just need to pay attention to the many pedestrians. Along the ride, you can also make a little detour towards the majestic Palace of Versailles. Once you go back on the main route, you enter the countryside of the Île de France. You go past Orsay, walk along the Rambouillet Castel and arrive to Épernon. This is still a temporary route, supposed to be completed; therefore, it has not been signaled yet. We suggest following the GPS tracks in order to travel over it unfalteringly.

This short but enjoyable length of Véloscénie travels mainly over country roads. The green road stretches through the valley and its lovely villages, allowing to reach safely the city of Chartres and admiring its cathedral. Along the route, a little detour leads to the Maintenon Castle and its ancient aqueduct.

This length of the bicycle lane leaves Chartres and carries on along the Eure River, on a green road; it travels across the so-called “France’s granary”, the region of Beauce, where the fields boss the show, and then arrives to the beautiful village of Illiers-Combray. The open view in the Beauce plain brings rapidly to Thiron-Gardais, the approach to the region of Perche.

With the city behind, you go northwest and pedal on breathtaking paths in the Normandie-Maine Regional Natural Park until you reach Carrouges and the thermal resort in Bagnoles de l’Orne. A charming and regenerative break before you reach Domfront among olive groves, apple trees and woods. The essence of Normandy to be discovered by bicycle.

This length of Véloscénie travels over the former railway route. Known for the cultivation of pears and apples and for the local gastronomy, the Normandy countryside leads to the beautiful villages of Mortain, in the heart of the region, and Ducey, the arrival of this second last length of the lane.

Get ready for a remarkable sight. This last length of Véloscénie travels over narrow roads linking ancient villages through the fields and leading to the peak of beauty in the route: the arrival to Mont Saint-Michel. The islet is surrounded by sand and grassy plains constantly moving due to the tide. The abbey –its construction started during the 10th century- towers over it. The final green road along the Couesnon River allows to really enjoy this marvellous place, which is also a UNESCO world heritage site.