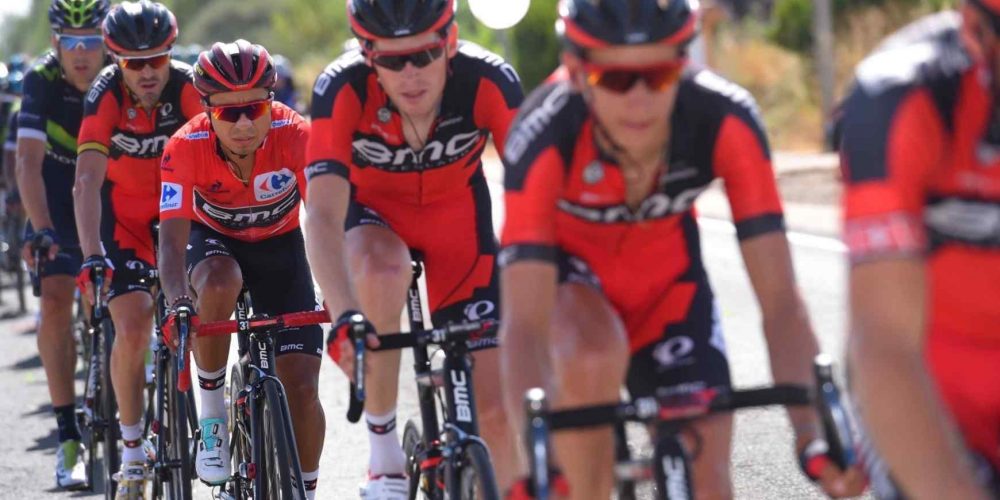 A short and steep summit finish on stage 8 saw Darwin Atapuma’s red jersey reign come to an end after four days as leader of the Vuelta a Espana.

Eleven riders broke away in the first 10km of racing, all of whom posed no threat to Atapuma’s red jersey, and managed to build a lead of more than ten minutes.

BMC Racing Team controlled the situation throughout the 181.5km stage which was completely flat in the lead up to the final 3km climb.

With gradients of more than 20 percent, the final climb completely broke up the General Classification contenders’ group who battled it out behind the surviving breakaway.

Sergey Lagutin (Team Katusha) took the win from the breakaway, and behind him Nairo Quintana attacked to take the overall lead. Darwin Atapuma lost time on the climb but holds on to sixth place overall, with Samuel Sanchez in tenth.

Quotes from the Finish Line

“I thought that I would be better today on the last climb. I didn’t know if I could keep the jersey but I wanted to do everything possible to keep it. I did my best in the last climb even though I was really suffering. The team did a great job of working for me and protecting the jersey in the last four days. It was a difficult day for me today but there are still a lot of stages here at the Vuelta a Espana. From tomorrow the climbs are less explosive and less steep than today so they’re much more suitable to my riding characteristics.”

“To wear the red jersey was a dream and something that I’ll always remember. But the Vuelta a Espana is far from over and I think we as a team can get more good results in the next two weeks.”

“It was a nice surprise to have the red jersey for BMC Racing Team, and for Darwin Atapuma. We helped him to stay in this position for as long as possible. Today we knew that it would be difficult but we took the responsibility of the red jersey and did a lot of the work at the front of the peloton. We made sure Darwin and Samuel Sanchez were well-positioned as the base of the final climb and finally they are both still in the top ten.”