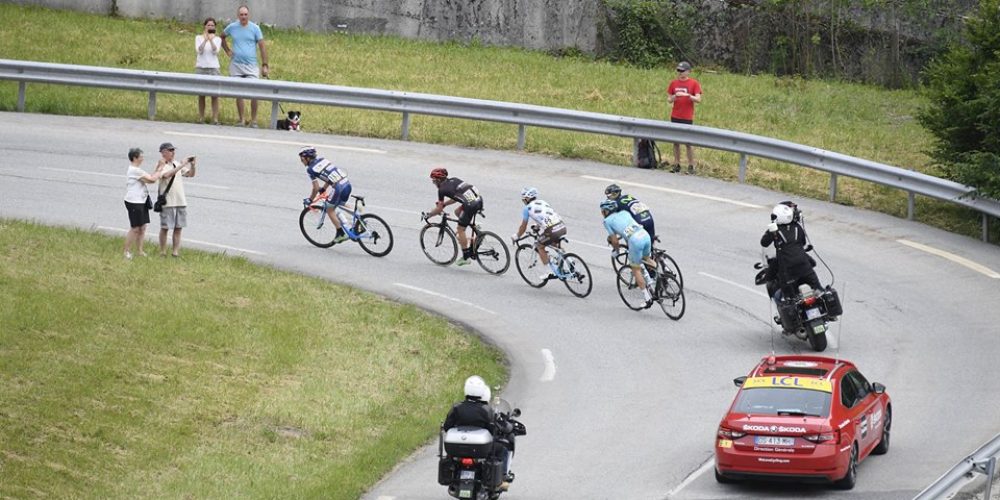 The team Wanty-Groupe Gobert was very active in the fifth stage of the Critérium du Dauphiné between La Ravoire and Vaujany. Our pro-continental team spent the whole day at the front of the race, first with Björn Thurau and then with Enrico Gasparotto. The Italian rider was caught with three kilometres to go. Guillaume Martin finished 28th only at 1’48’’ behind the winner Chris Froome (Team Sky).

« I didn’t feel so good in the first part of the stage. Finally I didn’t lose too much time », Guillaume Martin said.

There were many attacks straight from the start. Our German rider Björn Thurau and Andriy Grivko rejoined three riders at the front. Eventually a front group of 25 riders was formed. They got a top advantage of 1’15’’. At kilometre 51.5, the German rider crested the Col des Ayes (category 2) in second position. Grivko rode away on the descent of the Col des Mouilles while his former breakaway companions were brought back by the peloton at km 72. « Nobody wanted to collaborate. It is a shame because I think we could do something better with the riders at the front. I’m disappointed », Björn Thurau regrets.

Four riders – included the winner of the Amstel Gold Race Enrico Gasparotto – bridged the gap at kilometre 83 to make it a leading quintet. With 25 km to go, the leading group had 1’50’’ lead on the peloton which reduced the gap to one minute before the last climb of the day, Vaujany (category 2). « We did a great job. The peloton controlled well. We needed one minute more to fight for victory », Enrico Gasparotto thinks.

The Italian rider attacked with 6 km to go and was caught at three kilometres from the finish by the big leaders. Chris Froome won the battle of the favourites. Our French rider Guillaume Martin finished at less than two minutes from Chris Froome and took the 28th place of the stage. « I just tried to stay in my rhythm. It was the good choice because I caught a few riders back. I finished the stage in a group with Thibaut Pinot and Fabio Aru. It is not so bad », Guillaume Martin analysed.

Tomorrow the queen stage between La Rochette and Méribel takes place with the Col de la Madeleine and the uphill finish in Méribel. « I will continue to ride at my own pace and try to get closer to the top 20 in the general classification », Guillaume Martin concluded.